Better Than the Real Thing

We’ve reached a pivotal point in the information sharing business when it’s impossible to tell the difference between the annual “April Fool’s” stories in the MSM and the real ones. I mean, come on: USA Today poll shows 50% of the country doesn’t think Obama deserves to be re-elected? The Messiah has only been in office 14 months, you can’t blame him for the economy, unemployment and nationalization of banks, autos and healthcare. So that must be phony news. Or how about this one: Obama authorizes off-shore drilling for oil. Heh, that’s a good one…unless he’s starting to buy votes for Cap and Trade. Too close to call.

Or on a more human scale, take the stories in the Detroit Free Press today. Which one would you swear your mother’s life on was fake?

New plans for an old monument 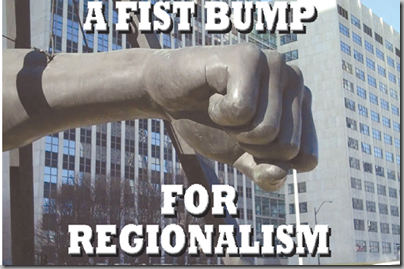 Video shows Oakland County Executive L. Brooks Patterson and Detroit Mayor Dave Bing discussing how Detroit plans to turn the iconic Joe Lewis fist sculpture around to point out towards the suburbs. It’s intended as a symbolic “fist bump” of cooperation, ending the decades-long antagonism between the City of Detroit and the suburbs.

Crews to start tearing down derelict buildings in Detroit 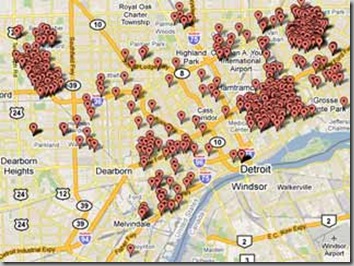 map of buildings to be demolished

In which Mayor Bing explains how we have to destroy the city in order to save it. He outlines plans for demolishing the first 3,000 of 10,000 buildings targeted for demolition.

And I won’t even bother to include the story about the man who used his 2 year old as a human shield to prevent being tasered by the police. That’s too easy.

In case you haven’t time to read the two articles above to find out which is the April Fool’s - and who does? – moving the Joe Lewis fist is the bogus story. We greatly prefer tearing stuff down to trying to build better relations with the ‘burbs. OK, I guess that was too easy too.

Have a nice April Fool’s Day. Keep working on your fraud-spotting skills. There will be ample opportunity in the future to make good use of them.

Bonus Round: Here are Team Dewey’s favorite fake news stories from the past year : Blowin’ in the Wind, and Michigan Petitions for Secession from the USA. Better than the real thing, baby.

Posted by DEWEY FROM DETROIT at 5:51 PM