Since it looks like this sort of national mania is going to occur with increasing regularity, we’re setting up a new category here at Dewey From Detroit. It’s called: “Things Detroiters Like”. I hope it doesn’t sound too much like reminiscing, but the problem is - a lot of things Detroiters like have changed dramatically or disappeared. (Like really, really cool, fast cars and Fire-brewed Stroh’s; but that’s another story.)

We begin our list with possibly the number 1 thing Detroiters like: Vernors Ginger ale. It’s what we drink around here. 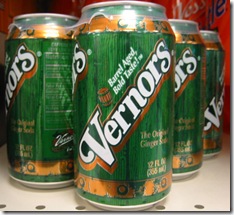 This is today’s bland can. The original Vernors, created by pharmacist James Vernor in 1866, was sold in bottles with one of these two pesky looking gnomes on the label. 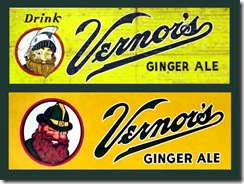 Note that the original name included, correctly, an apostrophe that was dropped in the 50’s. Part of urban renewal.

Local legend has it that just before being called up for Civil War duty, Vernor placed some ingredients – including ginger and vanilla – in a barrel. When he returned 4 years later it had aged into a golden elixir which when blended with soda water turned into an intensely flavored and ridiculously effervescent liquid. He served it from his drugstore soda fountain and opened a bottling plant in 1896 to keep up with demand. If you are from Detroit, or anywhere in Michigan, Vernors was an all purpose beverage and tonic: it made a great float and could cure anything that ailed you from indigestion to pneumonia. It was frequently served warm when used as a tonic.

This is not the wimpy sort of “ginger ale” made by Schweppe’s and Canada Dry (although, ironically,Vernors is now owned by Cadbury Schweppes) . People use that stuff to make wimpy “highballs” like “Seagrams and ginger ale” ; as in generic, pale dry ginger ale. (Seagrams, incidentally, is made just across the river in Windsor, our Canadian cousin, eh?). No sir, if you use Vernors in a drink it has to be a Dark ‘n Stormy: Gosling’s black rum and Vernors, no ice.

Vernors should have a warning label, as it will get up your nose no matter how careful you are. And it packs a sinus clearing punch comparable to fresh, hot horseradish combined with wasabi. It makes us cough and sneeze. We cannot live without it.

We’re still ticked off about the gnome getting the shaft though. He resided on this neon sign at the Woodward Avenue bottling plant for years, pouring an eternal stream of Vernors into a mug. First they shut his plant, than they booted him off the labels, and finally they knocked his sign down. You would think the rest of us Detroit based gnomes would take the hint and get out of town.

In 1954 the Vernors gnome took up residence atop an oak barrel on this 55 foot sign outside the bottling plant at Woodward and Forest. The plant was relocated there from the foot of Woodward Ave. because the city coveted Vernors’ riverfront property for a “City Center” development. Here’s an up-close and colorful view of the “new” plant. Sort of reminiscent of early-Communist-block architecture, except without the charm. The colors help some, but makes it look too much like a Notre Dame bookstore. 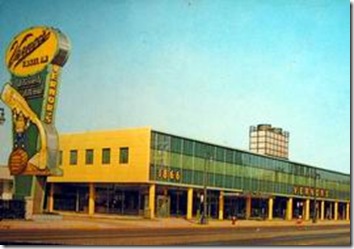 Here’s a William Moss rendering of the original Vernors plant on Woodward, with the Bob-lo boat Ste Claire at the dock. Detroit used to be grand before the city planners arrived. 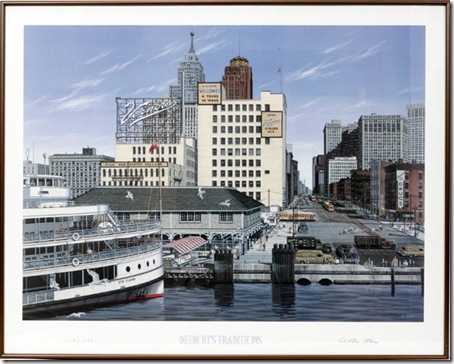 By the way, this scene is where Hart Plaza and the One Woodward (formerly ANR/Michigan Consolidated Gas) building now stand.

United Brands closed the plant in 1985, and it was later razed. It was not a good omen of things to come for Detroit. If they’d do it to the gnome, they’d do it to anyone. And they did.

Detroiters’ favorite homage to Vernors was a 1987 commercial done (sort of) by Red Wing Petr Klima. Klima had defected from Czechoslovakia 2 years previously and spoke essentially no English. Nor was he very good at geography, as demonstrated by his inability to pinpoint his location in the “mitten state”. Klima, along with Steve Yzerman and Adam Oates, skated the Wings to the semi-finals that year for the first time in modern history. The Red Wings are, of course, something else Detroiters love. 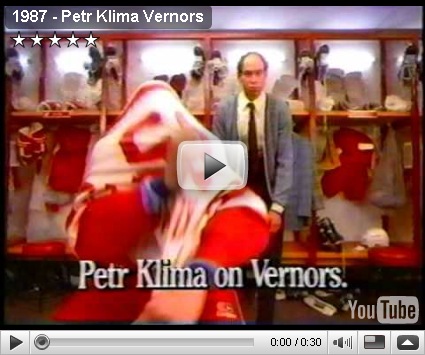 The Boston Cooler: it’s a Vernors float with vanilla ice cream. It has nothing to do with Bostonians. It was invented and served at a soda fountain on Boston Boulevard in Detroit.

And here’s a little known fact: Vernors was partially sweetened with Stevia from 1866-1991 which gave it a "deliciously different" taste. Stevia was replaced with high fructose corn syrup when the FDA banned Stevia in 1991 (What’s wrong with plain old sugar? We grow and process tons of sugar beets in Michigan. Besides, everyone knows corn makes better gasoline than sweetener.) Old timers complain that it’s now flatter, sweeter and not as intensely gingery as the original. But like I said: they did it to the gnome. They can’t be trusted.

PS. Stevia is once again cleared for landing by the FDA. It turned out to be much ado about nothing, just like with saccharine.