Sadly, Detroit is best known to the world’s under-30 population for its decline, decay and danger. Few aspects of Motown life contribute to this image more than Devil’s night: which is actually a 3 day event that commences on October 29 and ends on Halloween. 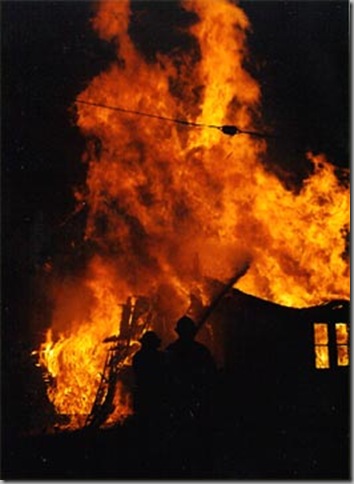 Devil’s Night is Detroit’s relatively recent annual festival of fire: arson fires to be more specific. It’s this mixed bag of vandalism, insurance fraud, and normal every-day fires that captures the attention of amateur and professional “fire photographers” from around the world. This year, with its 27% unemployment rate and record high home foreclosure and abandonment rate (it is estimated that 40,000 homes were abandoned in the past year alone), Detroit stood poised to set a new record.

“Official” figures won’t be released until next week, and if previous guidelines are followed, many fires won’t make the final cut to be included as “official” fires. Rest assured however, that, no matter how many fires erupt, Detroit’s finest fire fighters will risk their lives extinguishing the blazes of Detroit’s deadly “urban renewal” project.

The city encompasses nearly a hundred thousand abandoned structures, all potential powder kegs of devil’s night mayhem. Despite that fact, the reality is

the city is in such financial ruin that the Detroit Fire Department now functions with nearly 300 fewer firefighters than a decade ago. Economic hardships coupled with a historic preference for cutting police and fire budgets rather than “essential” administrative and clerical staff has thinned the ranks of the DFD from 1,325 to 1,098. 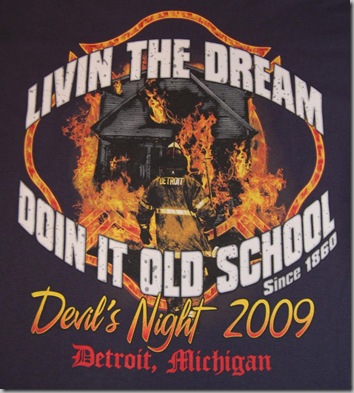 Detroiters escalated the time honored traditions of trick-or-treat vandalism - home egging and mailbox assaults – to arson in the ‘70s. Over the next decade, financially troubled business’ and others with good insurance policies joined in the Devil’s Night fun for profit.

Detroit’s government officials did not sit idly by wringing their hands. First, former Mayor Coleman Young redefined the “overly broad” term fire to eliminate from reports fires that aren’t “really fires”. Then, in 1985, Mayor Dennis Archer and the city council leapt into action and rebranded Devil’s Night, “Angel’s” Night, hoping to change the tone and persuade evil doers to come to the city-sponsored Halloween parties instead of torching a city block. This, it was believed, would establish a new tone, engender a new respect for the evening; and reduce the number of “man caused disasters.” Even after redefining the “overly-broad” term “fires” and rebranding the night, the city’s bean counters had to commit “calculator abuse” in order to prevent or reduce the number of Devil’s Angel’s Night fires.

The election next Tuesday will reveal if Detroiters are willing to put Dave Bing in office for a full term to continue his efforts to reform the city. Or will they vote to continue the steady decline of the last 40 years of failed leadership, hoping to get some of that stash of Obama money to fix everything..

Linked By: Wikipedia, Thanks!

Posted by DEWEY FROM DETROIT at 4:44 PM