Shut Up and Sing. I Really Mean It

Michelle announced on the Leno show last Friday that she has Sting on her iPod , and the next thing you know we get this: Sting: Obama Best Person to Handle World’s ‘mess’ 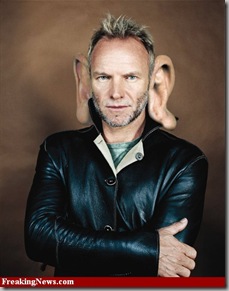 In addition to believing he’s the world’s savior, something else Sting shares with Obama: like dogs that look like their masters

Sting explains the basis for his assessment, based on a meeting he had with Obama (no time for General McChrystal, but time for an aging rock star?):

"I can't think of any be (sic) better qualified because of his background, his education, particularly in regard to Islam," he said.

Sting, 58, said he's hopeful that the world's problems can be dealt with, but is frustrated that "we seem to be living in a currency of medieval ideas."

The problem, according to the great statesman, lies not with Islam’s embrace of medieval ideas regarding women, infidels, etc., but with Obama’s opponents on the right:

The British singer… said he's fascinated by American politics, Obama, and also by Obama's opponents on the right.

"It's aggressive and violent and full of fear," he said of the backlash against Obama. "They don't want change, they want things to feel the same because they feel safe there."

With such powers of analysis, Sting would be wise to heed Laura Ingraham’s advice: Shut up and sing. And maybe he should revisit one of his own songs:

If Ever I Lose My Faith In You

Ironic that Sting doesn’t recognize Barry as the prototype for his “game show host” lyric.

Posted by DEWEY FROM DETROIT at 9:04 AM