You Can’t Handle The Solution!

Finally, two honest articles on the plight of Detroit in one of Detroit’s major newspapers. The last time that happened was … well, never. Dan Howes’ articles Detroit Supplies Ammo For Its Bad Image and Bing Battles an Environment of Corruption finally begin to pull the curtain back on the the real issues that caused Detroit’s collapse. 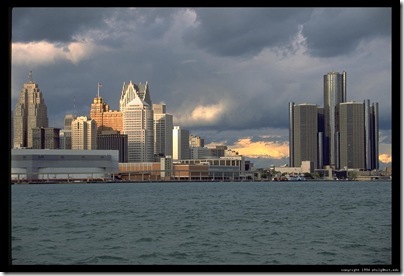 In the past the majority of articles written about Detroit by local journalists have adopted the stance that there’s no point in bashing the city; what we really need to do is stand together, lock arms, swear off our racist attitudes (if you are a white suburbanite) and work together to fix our problems.

Heaps of blame has always been piled on the suburban communities for being parochial and unwilling to go all-in for “regionalism:” in which Detroit gains and everyone else loses. For years the Annual Detroit Chamber of Commerce Meeting on Mackinac Island served as a meeting place for regional business and political leaders. The main event consisted of a kabuki dance of the “Big 4” –  Executives from Wayne, Oakland and Macomb counties plus Detroit’s mayor.  Year after year, even as the players change, the dance remained unchanged: lip service was paid to working together to solve regional problems that would result in the creation of a fantasy regional megatropolis. Resources were committed, everyone wined and dined and then returned to their respective corners to conduct meetings until the following year’s dance.

Meanwhile, Detroit sunk deeper and deeper into the muck. You were not to criticize city government or it’s leadership too harshly. You were not to point out the waste, patronage and other corruption that went on in the city. And you certainly weren’t to mention that Detroit taxes were anathema to business inside the city limits.

In our increasingly hyper-sensitive world, criticism is seen as “mean” and unhelpful. The prevalent bumper-sticker philosophy: “if you’re not part of the solution, you’re part of the problem” expanded to include critics; casting then as useless naysayers. But the trump card for shutting down criticism, of course, was the charge of racism which immediately shifted the debate.

To avoid charges of racism there were only a few proscribed approaches for discussing the city’s problems:  you were allowed to wring your hands helplessly, you were allowed to mourn the demise of the city as long as you acknowledged that its fate was the result of white flight and governmental neglect, or you could pull a Pollyanna and proclaim that Detroit was simply in hibernation waiting to rise from the ashes. But under no circumstances were you allowed to speak the unspeakable truth: that for over 30 years Detroit has been governed by Black leadership - with the complete complicity of the Democratic Party – and that each year the city had grown worse.

Does that sound racist to you? If so, you’ve made my point. It’s not racist to speak the truth, and it’s irrelevant whether the city was trashed by blacks or whites. But you can’t have it both ways, you can’t have exclusive Black control for 30 years and still claim that all of your failures and shortcomings are due to racist suburban whites. And yet that’s the game that Detroit’s been playing, and local media have, by and large, served as willing accomplices.

The facts are that Detroit has been in the hands of a Black mayor and a predominantly black city council for over three decades. During that time the public schools have been destroyed, the neighborhoods have been destroyed, city infrastructure has crumbled and both residents and businesses have fled. This, while sucking into its maw billions of dollars in federal funding for asinine projects like the “People Mover” which sometimes moves, but often is lacking the people. If these results don’t constitute gross mismanagement, what does? Every stone that’s turned over in this city reveals another repository of graft and/or corruption.

So much for the diagnosis, is there a cure? The good news is it doesn’t require brain surgery. Just some very, very bad tasting medicine. As it turns out, the problem is not that solutions are so elusive, it’s that - to paraphrase Jack Nicholson in A Few Good Men - “YOU CAN’T HANDLE THE SOLUTION!”

Mayor Dave Bing (who ‘won’ the office after Mayor Kwame Kilpatrick was convicted of a felony and further embarrassed a city that you wouldn’t have thought could be further embarrassed) will be the doctor trying to administer the dosage to a patient that will fight it at every turn.

Do you know who Dave Bing is? He’s a successful businessman and former Detroit Piston who does not need this aggravation at this point in his life. He’s not in the game for the money or the glory – he’s done all that. He’s here because he is genuinely aggrieved by what has happen to his adopted city. He comes from a political mold that we barely recognize any more: he’s a citizen statesman who brings something to the table. He has run his own business for years and therefore understands economics, accounting, finance, business planning, customer service and accountability. He could turn this city around.

His race? It should be irrelevant, but as we all know it isn’t. He’s a Black man: accomplished and capable. 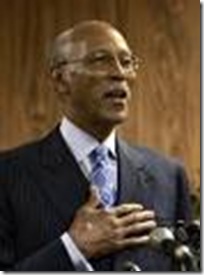 But when all the vested interest groups begin to grasp the intent and impact of his turnaround plan he will not be Black enough. He’ll probably be accused of being an Uncle Tom. He has thus far refused to play the game by the decades-long rules of racial gimme politics.

In his column, Howes  points out some constituencies he’ll likely not be able to count on:

Not the unions, accustomed to living off an expanding public sector now contracting because revenue is disappearing. Not City Council, captive as some of its members are to the quasi-religious belief that privatization of any city service is bad, mostly because it would impact political patrons in labor. And not vendors, their bank accounts fattened by city contracts.

Dave Bing has a plan for turnaround, but odds are it will be “change Detroit won’t believe in” or support.