Detroit Schools: Where We Eat Our Young

If you can read this, thank your parents for not sending you to a Detroit public school.

Last week the DPS called a press conference to announce that Detroit public school 4th and 8th graders scored the lowest math scores in the country, ever. This officially makes Detroit the worst school district in the country.

Detroit Public Schools students posted the worst math results ever recorded in the 40-year history of a prestigious nationwide test, according to scores released today.

Sixty-nine percent of fourth-graders and 77 percent of eighth-graders scored below basic skill levels in math on the National Assessment of Educational Progress, a standardized test that serves as a nationwide yardstick in measuring student learning.

Crain’s Detroit Business has laid out the results in unvarnished detail:

Michael Casserly, executive director of the Council on Great City Schools, said “There is no jurisdiction of any kind, at any level, at any time in the 30-year history of NAEP that has ever registered such low numbers,”  But that’s not even the bad news; he continued, "These numbers are only slightly better than what one would expect by chance as if the kids had never gone to school and simply guessed at the answers.” Got that? Our education system is as good as letting the kids hang out at one Detroit’s great casinos all day.

Slightly better than kids who had never gone to school? How much are taxpayers spending for this roll of the dice? According to the Heritage Foundation, Detroit spends over $13,000 per student per year on K-12 education.  Only six other large urban school systems spend more. Yet even districts that spend only a fraction of Detroit’s per-capita outlay have graduation rates 2 to 3 times higher. Detroit’s high school graduation rate is an embarrassing 24%. The test scores – the first time the test has been administered in Detroit – might go a long way to explaining the graduation rate.  Casserly explains clearly what these test scores mean for Detroit’s future: “frankly, this city has no viable future if this is allowed to stand.” We’re beyond mincing words.

So, you would suppose that the Detroit School Board and the Detroit Teachers Union would be mortified and ready to pull out all the stops to fix this national humiliation. But you would be wrong. Instead,the Detroit School Board is fighting with Robert Bobb - DPS Emergency Financial Manager brought in by Governor Granholm last March to fix the district’s financial disaster created by the DSB - over control of academic standards. The school board wants to maintain control over “academic standards” in the district, and Bobb  thinks they’ve managed them about as well as they have the finances of the district.

Bobb noted in the Crain’s article that the Detroit Board of Education had three key documents describing academic and financial shortcomings prior to his appointment.

The district had the internal audit outlining its financial woes, an educational report written by the governor's transition team and a report from Casserly's Council of Great City Schools. which were ignored or derided by school board members.

But they want to maintain control. Because they’ve done such a swell job so far.

In a sane world, it would be obvious that they are the ones responsible for the academic standards that led to this most recent embarrassment. But we don’t – live in a sane world, that is – so the DBS is heading to circuit court for a hearing. Don’t bet on the outcome.

Meanwhile, the district faces a $219 million deficit (further proof that no one in the school system is proficient at math) and is teetering on the brink of bankruptcy. So what are the teachers doing? They’re threatening to walk out rather than accept the terms of the contract their union recently agreed to. They don’t like that the bankrupt district requires them to defer up to $10,000 of their pay – not a cut mind you, a deferred payment –  in order to avoid a bankruptcy filing. (The union rejected all other offers, including concessions of pay and benefits). A bite to be sure, but then…the kids don’t seem to be benefitting much from these high priced baby sitters.

Teachers don’t see it that way of course. In addition to threatening to go out on strike, they are talking about ousting their Union Chief. 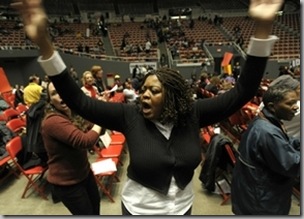 As one (math) teacher explained “When your boss gives you a check and says you either have to give up part of it or lose your job, that's extortion."  Interesting way to look at it. But if this was playing out in the real world, Mr. Bobb would have simply laid off a slew of teachers and redistributed the work load. But the teacher’s union won’t hear of such nonsense: besides, they’re doing it for the kids. How could they possibly learn in such over-crowded classes? On the other hand,  it’s hard to imagine how much worse test scores could possibly get. After all, all they have to do is flip a coin. 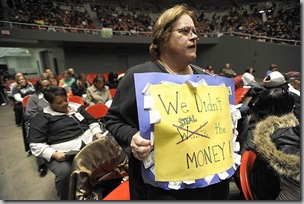 Another (math) teacher explained why she was opposed to the new contract terms: “We haven't had a raise in several years and I can't retire for another 15 years, so what good is this,"-  uh, at least you still have a job - "They're saying they want the money because they can't make payroll...We're at the bottom of the pay scale in the state, but we work in the toughest district and we work harder than anyone else."

That’s what passes for logic in liberal-la-la land: where effort and intentions are as good as results and outcomes; and reality never intrudes on utopia. *

So let’s summarize: Detroit spends over $13,000 per student in order to achieve the lowest math scores in the nation while only managing to graduate 24% of their students from high school. The system is functionally bankrupt, and the teachers want more.

* If you still don’t think there is a socialist agenda in education, you really should read this nice little piece from The World Socialist Website on the Detroit teacher’s union current contract terms. They manage to firmly affix Detroit’s school problems on “corporate media mouthpieces”  and propose that we replace capitalism with socialism.

Posted by DEWEY FROM DETROIT at 6:36 PM