Detroit, Back to Its Roots

There is something innate in human nature that draws our gaze to an impending train wreck, and maintains our slack-jawed attention as we gape at its aftermath. It’s like that with Detroit, which has been voted the worst train wreck in the “major American city” category. Journalists, artists and bloggers from across the world come to look at, photograph, write about and paint us. Then they go home to wring their hands and weep over our detritus.

Consider an interesting fact about Detroit: it’s huge, even by city standards. 140 square miles. Manhattan, Boston and San Francisco could all fit comfortably within the borders of Detroit and still have room left over. 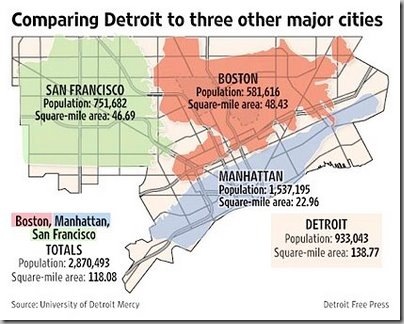 There are approximately 40 square miles –essentially the size of San Francisco - within the city that stand empty (see previous post, “Feral in Detroit”). That number’s likely to increase as the city’s population continues to decline from it’s peak of  nearly 2 million in the 1950’s to it’s current 800,000, to an estimated 600,000 by 2025. The problem of course is that today within the 140 square miles there exists a very low density of any type of industry or businesses. So few in fact that there is not so much as a single chain grocery store, Wal-mart or Costco. Of course that’s hard to believe, but believe it. While there may be a market for product, issues such as crime, city services and extortionist tax rates keep retailers away like the plague.

The question of course is what to do with a city that has crumbled both literally and figuratively? Popular recommendations among urban planners and social engineers include “shrink to fit” plans, and “return to your roots.”  Allow me to translate: recognize that the city will never return to its glory days (the best is behind us), so we just have to make do the best we can by shrinking down (reduce our carbon footprint) and returning the land to its natural state (establish sustainable farms within the city limits.)

If that sounds  familiar it’s because it’s a slight variation on the liberal template for America: recognize the end of American exceptionalism, contract our economy and lifestyles, and leave a smaller carbon-footprint by learning how to live with only “green” sustainable energy. If I may borrow a phrase from our President, “that’s just bunk.”

There’s just something about me that does not like to settle.

Having said that, here’s the best argument for radical reductionism that I’ve seen to date: Detroit: Urban Laboratory and the New American Frontier. Aaron Renn, the Urbanophile and author, is not an academic urban planner, but has actually worked in the real world as a systems strategist. He has written a purposefully provocative article on how to deal with failed cities like Detroit, making painfully accurate assessments of what the changeup in the manufacturing sector in the rust belt means for the region. And while he touches on the leadership problem this major urban center has struggled with (both Detroit proper as well as regional) he hasn’t identified it as one of the most critical aspects of this city’s descent into the five rings of Hades. But in fact, ever since Coleman Young - lionized to this day - took the reins (or reigns) of power in the city it has been run by a self-serving Black Mafia. Negligent leadership has contributed as much to the city’s demise as the failure of the Autos and the anti-business climate of the state combined. The only good news is that proper leadership may end the slide and even commence the steep, difficult climb back to the surface. With Dave Bing’s win yesterday in Detroit’s mayoral election there is reason to believe that ascent is possible.

But back to Mr. Renn’s piece; it is provocative. And useful for pointing out a few starting points on the path to redemption. His view does include a version of shrinkage and urban farming, although it stops short of  turning the entire urban landscape back to it’s agrarian roots. For that vision you need to go to Guernica: Food Among the Ruins  which is referenced in the Renn post. This is an equally provocative but more earnest argument for leveling miles of urban wasteland and returning them to the farms that stood here before Henry Ford imagined a world on wheels.

On its face the urban farm concept for a city as deeply scarred as Detroit holds a great deal of poetic appeal. After all, the city was built on rich, arable farm land that still lies beneath the structures. The once fertile fields were gradually annexed and filled with housing stock to meet the needs of a growing urban population that congregated around the industries that built America into the most powerful industrial giant the world had ever seen.  Now that this industrial base has crumbled, many Americans are experiencing a low level angst about our preeminence at anything other than having elected the smartest President since JFK. For them, it just feels right to rip up a forlorn city – emblematic of everything wrong with the past -  and return it to its roots, so to speak. An urban homage to agriculture: how post-modern, how ironic. How moronic.

But it is the circle of life. Poetic? I suppose. Pragmatic? Certainly. Practical? Not so much.

But let’s play along for awhile. Could it be accomplished? I would think so. You would have to tear up infrastructure that would cost a fortune to remove and an even larger fortune to relocate. Why bother to relocate you ask? Oh, I don’t know, perhaps because the entire 140 square miles includes grids of electric lines, gas and water mains, and fiber optic cable that are all interconnected, north to south, east to west. Just yanking them out where you want to grow organic Tuscan kale and heirloom tomatoes might cause downstream problems. Someone who still lives in one of the remaining “urban villages” might notice if they no longer have heat, lights water or cable TV.  I suppose you could tear up the streets and sidewalks if you no longer need them, although that’s where most of the cable, gas and water mains are buried. I’m sure we can work around that. But we’ll need some federal funds to help cover the costs.

Then of course there’s the toxicity created by 100 years of city life: dry cleaning plants, buried gas and oil tanks, god knows what else. Soil testing and bio-remediation would undoubtedly create thousands of jobs, so that’s a good thing. It’s just not cheap, so we’ll need some federal funds to defray costs. Oh, and forget about a USDA certified organic designation, even after remediation. Not going to happen.

But suppose everything works out. Suppose the two-story bee hives are humming, the escarole is waving in the breeze and the customers are buying the produce as fast as it can be harvested. Unless they are operating as non-profits, the current tax structure in the state as well as the city might become an issue. They’ll have to cover Detroit’s city income tax (highest in the state),  Wayne county’s property taxes (near the top) and the state taxes and levies  - also  among the highest in the country, no matter how our state’s public relations team tries to spin it otherwise. That might make farming, which has notoriously thin profit margins, a risky business without some tax subsidies.

But hey, I hear you. I’m just being a nay-sayer, when what we really need around here are some visionaries. 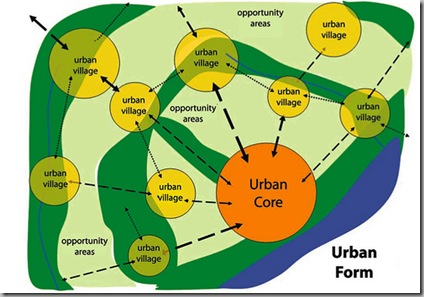 So I hope we can locate a visionary who sees the possibility of consolidating city services into the urban core and de-annexing the remaining clusters of  urban villages to the highest bidder, maybe on Craig’s list. If you win the bid, you can be mayor for 8 years and compete with your fellow mayors for state and federal funds to develop your village into enterprise zones where urban homesteaders might actually want to  live and work.