Here’s an exact copy of an email team Dewey got from the White House two weeks ago (Dewey can be remiss in regularly checking all his email accounts). I have no idea how the White House got our email, but thought you might enjoy their attempt at “getting their message out” to all the good sheeple.

It's not working for women...

Our broken health care system that is. That’s right -- it’s not working for many women and their families.
In many states, insurance companies can still discriminate on the basis of gender -- and not just on costs. In some states, maternity care is not covered because pregnancy can be seen as a “pre-existing condition.” It’s even legal in some states to deny a woman coverage because she’s been a victim of domestic violence!
That’s not right. Nobody in America should be treated that way. That’s why First Lady Michelle Obama is standing up for women and families in this newest video. Take a look:

With health insurance reform, the days of discrimination based on gender will be over. Insurance companies will be banned from denying coverage because of a pre-existing condition, or dropping your coverage when you get sick and need it most. They will have to cover preventive care like mammograms and pap smears. And they will be forced to abide by yearly caps on how much they can charge you for out-of-pocket expenses.
But we can’t make health insurance reform a reality without your help. As the First Lady says, talk to your family, your friends, your neighbors. Share this video with them and help get the word out about what’s at stake. It’ll take all of us working together to deliver the change we need on health care.

Pretty cool. An email. From the White House.

Maybe they should elaborate just a bit on exactly what kind of health care they really have in mind for women (and we assume everyone else as well.) Let’s start with this; ladies, you can now forget about your annual mammogram: New guidelines released by an influential government-funded authority on screening offer this message: never mind.

Yep,they’ve pulled a Rosanna Rosanna Dana on everything we’ve ever been told.  The  U.S. Preventive Services Task Force now recommends you start mammograms at age 50 (currently 40)and have them every two years (currently annual). And remember those self-exams you were supposed to be doing monthly? You can skip them altogether now; in fact the U.S. PSTF demands that you stop. For your own good. You see, these new guidelines are meant to  give you  – peace of mind. Don’t worry your pretty little head.

“The guidelines were formed by weighing benefits of screening compared with the harms of false positives, such as anxiety and unnecessary additional tests and biopsies, which are expensive and time-consuming.”

Boy, if this doesn’t smack of liberal-logic, I don’t know what does. As we’ve previously posted here and here, this is all about cost containment. Government provided healthcare cannot possibly begin to cover the types of tests and procedures that are now commonly available and used. It’s that simple: it COSTS TOO MUCH!

So if you also think this might have something to do with cost savings, get in line, because so do a whole lot of other people: doctors and scientists in the fields of oncology, radiology and cancer research.  Even Reuters is reporting a whiff of disingenuousness:

Cancer experts fear new U.S. breast imaging guidelines that recommend against routine screening mammograms for women in their 40s may have their roots in the current drive in Washington to reform healthcare.

Critics of the guidelines, issued on Monday by the U.S. Services Task Force, an independent panel sponsored by the U.S. Agency for Healthcare Quality, say the new guidelines are a step backward and will lead to more cancer deaths.

"What is going to happen is insurers are going to say, 'The U.S. Preventive Services Task Force doesn't support screening. We're not going to pay for it,'" said Dr Daniel Kopans, professor of radiology at Harvard Medical School and a senior radiologist at Massachusetts General Hospital in Boston.

"There were no new data to assess. One has to wonder why these new guidelines are being promulgated at a time when healthcare is under discussion and I am afraid their decision is related to saving money rather than saving lives," Kopans said.

Len Lichtenfeld of the American Cancer society says his group will still recommend mammograms for 40-something women, but expresses the obvious concern:

Lichtenfeld and other doctors are worried that insurance companies and government insurers will seize on the recommendations as a way to control rising health costs.

The list of critics is long: Mayo Clinic Researcher, Miami Herald, New York Times (!)… I think you get the point.

If you actually trust the government, operating as a single source Medical System – because that’s what it will become – to have checks and balances in place to avoid abuse and ensure you the best health care possible, well, you need to seek mental health care while it’s still available in this great country of ours.

As for us, we’re just confused. Do we want to save the ta-tas or not? 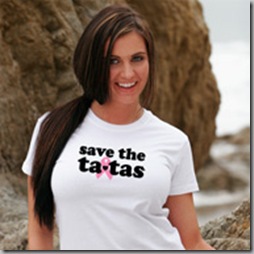