When The Gales of November Came Early: Update with Video Link

Gordon Lightfoot: The Wreck of the Edmund Fitzgerald

For those not familiar with the Great Lakes Basin, it is comprised of a vast series of in-land seas. Four of the Great Lakes more or less wrap around Michigan, continue east to Ontario on their way through Niagara Falls before flowing into the Atlantic ocean via the St. Lawrence Seaway. The Great Lakes basin is the busiest commercial waterway in the world, shipping coal, iron ore and grain around the world. 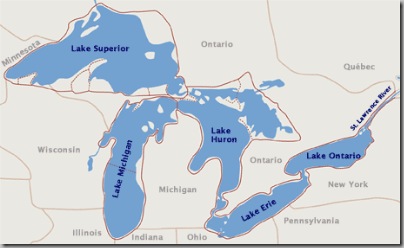 But for the ocean going behemoths that ply these seas, the Great Lakes can be as treacherous as any ocean. Storms here have claimed hundreds of ships and thousands of lives over the last two centuries. The Great Storm of 1913 alone took 250 people and 19 ships to a watery demise. That storm, also known as the “White Hurricane” took place over the course of 3 days in November during which two storms converged creating a blizzard on the Great Lakes accompanied by hurricane force winds.These conditions can cause a series of rogue waves, known as the three sisters on the Great Lakes because they usually come as a trio and are said to be anywhere from a 20 to 90 foot wall of water.

But as deadly as the storm of 1913 was, the most infamous ship wreak on the Great Lakes is the S. S. Edmund Fitzgerald; due in no small part to it’s being immortalized by Gordon Lightfoot. 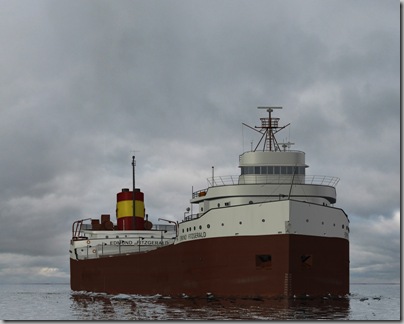 The Fitzgerald set sail from Superior, Wisconsin on the afternoon of Sunday, November 9, 1975 under Captain Ernest M. McSorley. She was en route to the steel mill on Zug Island, near Detroit, Michigan, with a full cargo of taconite. A second freighter, the Arthur M. Anderson, destined for Gary, Indiana out of Two Harbors, Minnesota, joined up with the Fitzgerald which, being the faster ship, was in the lead. 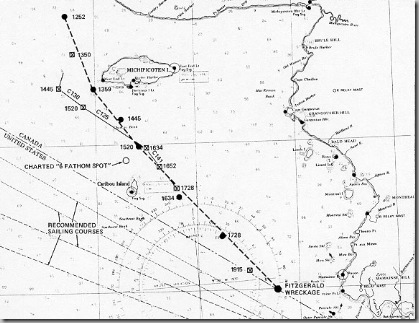 Path of the Edmund Fitzgerald on Lake Superior.

On the night of November 10, 1975 the Edmund Fitzgerald encountered one of the Great Lakes’ apocryphal late fall storms. Facing gale force winds of up to 45 knots and 16 -20 foot waves the Fitz lost radar and began taking on water. The official Coast Guard report cited “faulty hatch covers, lack of water tight cargo hold bulkheads and damage caused from an undetermined source.”

There are conflicting theories. Great Lakes mariners tend to favor the three sisters theory: in part because the Arthur Anderson, trailing a few miles behind, encountered two of the monster waves - estimated to be 30 feet high - themselves while still in contact with the Fitz. What is indisputable is that she went down with all 29 hands in Lake Superior just 17 miles from safe harbor in Whitefish Bay.

On this anniversary of the Fitz’s sinking, please join in our tradition of a proper Michigan toast to the ship and crew that went down in one of the worst storms documented in the history of Great Lakes shipping.

Most other locations have a mariner’s drink called the “dark and stormy” made of dark rum and Jamaican ginger beer. 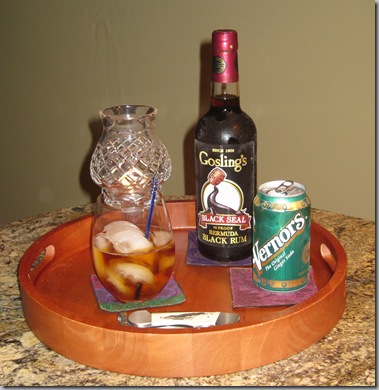 What we drink around here is similar but we’ve christened it the “Gales of November”. You’ll need an ounce and a half of Gosling’s black run, approximately 5 ounces of Vernor’s ginger ale and ice, if you must. Stir once, pray for the lost souls, and try not to think of the icy depths of Lake Superior on that fateful night. 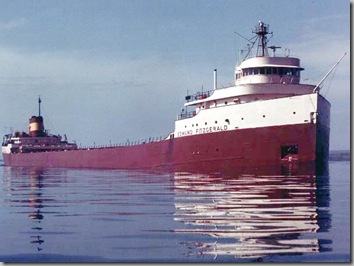 The Edmund Fitzgerald on a clear day

Update: Here’s an excellent video including footage of the underwater wreckage from Mrs. P at Patum Peperium

Technorati Tags: Edmund Fitzgerald
Posted by DEWEY FROM DETROIT at 12:10 AM