Sarah Brings Power To The People

How is it that the “stupidest” woman on earth can drive the MSM to such distraction? 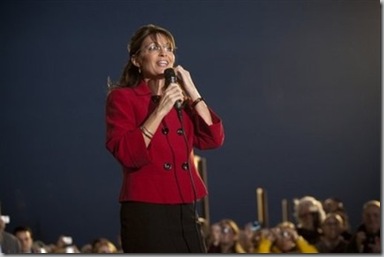 Sarah addresses the crowd in Grand Rapids Michigan before her book signing.

Maybe because the MSM is the source of  this fraudulent construct of an ignorant wench, and they are resistant (as usual) to facts that repudiate their version of reality. Myth maintenance seems to be a primary objective for the liberal media.

Using the silver platter they usually provide for themselves,  Mark Steyn  serves them up with customary relish:

If you wonder why American newspapering is dying, consider this sign-off:

Wow. That's ten "AP writers" plus Calvin Woodward, the AP writer whose twinkling pen honed the above contributions into the turgid sludge of the actual report. That's 11 writers for a 695-word report. What on? Obamacare? The Iranian nuke program? The upcoming trial of Khalid Sheikh Mohammed?

No, the Associated Press assigned 11 writers to "fact-check" Sarah Palin's new book, and in return the 11 fact-checkers triumphantly unearthed six errors. That's 1.8333333 writers for each error. What earth-shattering misstatements did they uncover for this impressive investment? Stand well back:

PALIN: Says she made frugality a point when traveling on state business as Alaska governor, asking "only" for reasonably priced rooms and not "often" going for the "high-end, robe-and-slippers" hotels.

THE FACTS: Although she usually opted for less-pricey hotels while governor, Palin and daughter Bristol stayed five days and four nights at the $707.29-per-night Essex House luxury hotel (robes and slippers come standard)...

That looks like AP paid 1.8333333 fact-checkers to agree with Mrs Palin: She says she didn't "often" go for "high-end" hotels; they say she "usually opted for less-pricey hotels". That's gonna make one must-see edition of "Point/Counterpoint".

Or is AP arguing "four nights" counts as "often"? Is that the point? AP assigned 11 reporters to demonstrate that four is a large number?

PALIN: How many AP fact-checkers does it take to change a lightbulb?

FACT: Palin has gone seriously "rogue" in her facts here. AP fact-checkers are prevented per union regulations from changing lightbulbs.

Can you imagine how Barry would present to the masses if the right wing ran the media - and had as great a disregard for journalistic integrity as the left does? Between BHO and Joey B we have the entire Keystone Cops repertoire, except not funny. But since the left still rules with an iron hand, they have given us the most intelligent, articulate, sophisticated man ever elected to the presidency. And Sarah? She’s a twit. Because they  say so.

But then, that’s why we’re all here isn’t it? 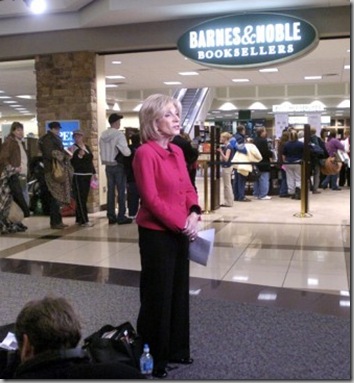 NBC’s anemic Andrea Mitchell in GR: like a fish out of water in “fly-over”

h/t annaz, who also has an excellent post on “Why I Still Love Sarah Palin.”