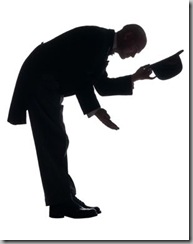 Question: Why would a powerful, narcissistic head-of-state bow to foreign royalty?

Answer: For the same reason liberals bow to the proprietors of certain ethnic restaurants; because they feel superior to them. And that makes them feel a little bit guilty.

And so now we have the Great Far Eastern Apology Tour. This time it’s more nuanced. The apologies are a bit more oblique. Such as this.

Obama is now the only sitting President who has failed to unabashedly defend the United States dropping  the A-bomb on Japan to end the war.  Obama couldn’t bring himself to do that. The video must really be watched to see how pathetically he handled a question that somebody in the State Department surely must have prepared him to answer. Bottom line: he couldn’t/didn’t answer the perennial question of whether we should have dropped the bomb. I am uncomfortable having someone serving as my president who can’t/won’t respond to that question.

If, when you’re done watching, you are confused by the President’s position, perhaps this previous post will help explain:  BHO’s thoughts on nuclear disarmament while still in college. Interesting, if for no other reason than it refers to the only documented example of Obama’s thinking from all of his brilliant collegiate years. (Apparently some prof found a copy of this old Sundial article in his files, or we wouldn’t have seen it either.) It may also explain why there are no other papers, articles or dissertations by the gifted one in circulation.

That brings us to the bow. To the emperor of Japan.

Heads of state DO NOT bow to royalty according to Thomas Lifson at American Thinker (his article has links to several photos demonstrating this fact). But even given that, Obama still got the bow wrong: there is no touching in bowing. 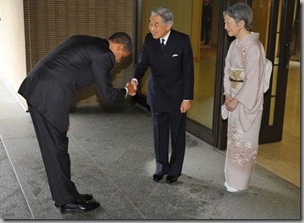 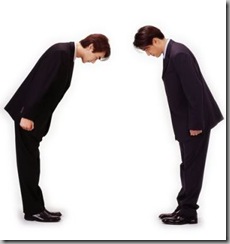 Who does this guy take protocol lessons from anyway? His Sushi chef? It seems odd, given that State has an entire department dedicated to nothing but protocol, that Obama would not have been adequately briefed on appropriate behavior, especially after the flap over the “non-bow” to the Saudi king. 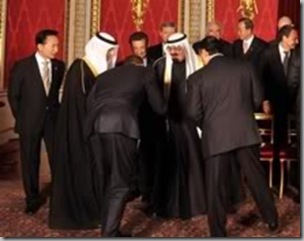 So let’s say ignorance of proper protocol probably is not the issue. There is something about the narcissistic personality that doesn’t think that rules – any rules – apply to them. Rules are for the others, the lessers, the little people. Narcissists charmingly do as they please.

They present the Queen of England with a tacky gift that’s also indicative of their totally self-absorbed nature, they refer to Great Britain in formal remarks as “England” (The Scots wish it were), they bow to the Saudi King and the Japanese Emperor and they scoff at the critics. They are simply being their charming, self-effacing selves. Keeping it real.

You know what I need a little less of in our President? Phony self-effacement.

It simply makes him look like a horses behind. 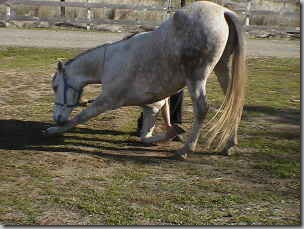 H/T on protocol : Touched With Fire