While it might sound a bit ghoulish, we love hunting for the remains of Jimmy Hoffa. 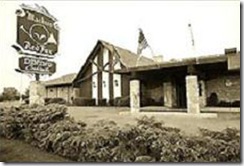 This somewhat peculiar past time has continued sporadically ever since  Jimmy went missing form the Machus Red Fox restaurant on Telegraph in 1975.

For people not yet born in ‘75, James Riddell Hoffa was at one time the president of the International Brotherhood of Teamsters, and arguably the most famous and powerful trade unionist of all time.  His career was cross-hatched with entanglements with Organized Crime, and it was well known in Detroit that he was “all mobbed up.” Unfortunately, that didn’t help him when Robert Kennedy’s FBI decided to target him for prosecution. He was  convicted of  jury tampering in 1964, and later, fraud.  He began serving an 8 year sentence in 1967 and was pardoned by President Nixon in 1971.

At the time of his 1975  “disappearance” Jimmy was, as they say, between jobs. He was banned from active Union activity until 1980, undoubtedly financially strapped, especially since both he and his wife had been fired from their functionary jobs at the Teamsters by Frank Fitzsimmons - the new head of the Teamsters. He probably should have taken the hint.

It is generally believed that Hoffa was killed by the mob because he wanted to make a come-back and recapture the presidency of the biggest union in America, a position he had relinquished when he was sent to prison in 1967, after being convicted of fraud and jury tampering. His comeback was something the mob did not want, and organized things accordingly.

On the morning of July 30, 1975 Jimmy Hoffa prepared to meet with his long time associate and friend Tony Giacolone – one of the most infamous of Detroit’s Organized Crime figures.

On July 30th., 1975, Jimmy Hoffa dressed casually in a dark blue pullover shirt, blue pants, black Gucci loafers, and trademark white socks. Sometime that morning, he received a telephone call at his two storied, cottage-style summer house on Square Lake, in Bloomfield Hills, about 20 miles north of Detroit. It apparently confirmed a meeting he was waiting to hear about. He kissed his wife goodbye, and drove off at 1.15p.m. in his big, green, two-door Pontiac Grand Ville. He told his wife he was going to the Machus Red Fox restaurant, next to a shopping strip on Maple and Telegraph Roads, in Bloomfield Township.

And that’s the last anyone ever saw of Jimmy Hoffa. Nobody doubts that he was rubbed out that day, most likely by the Mob, but no one has ever found the body. Rumors of the whereabouts of his final resting place are legion: from the concrete pads at Giants stadium in the Meadowlands, New Jersey, to a junk yard in Hamtramck, to a swamp in Florida to the bottom of a river in Northern Michigan. Every few years another tip sends law enforcement off on another big dig. And that’s most likely what’s happening again, at a lumberyard in Detroit.

His remains will most likely never be found, probably because there was more truth than not to the purloined refrain from the Scarlet Pimpernel popularized in the 80’s: “We Seek him here, we seek him there, but Jimmy’s buried everywhere.”

A lot has changed in Detroit since old Jimmy went missing. Machus Red Fox has been gone for over 15 years.

The Pontiac Grand Ville, like Jimmy, met it's demise in 1975.

Unions have switched their allegiance from the Mob to the Democrats,  The Mob itself has changed its face, and apparently is now made up exclusively of angry old racist white guys. And the city of a million hopes and dreams continues its steady pace of atrophy.

I don’t know where Jimmy Hoffa’s remains are. But I’m betting as long as there’s money left in the Stimulus Bill, he will provide the country with one shovel ready project after another. Who doesn’t like a good scavenger hunt?