You Are Now Free To Move About the Socialist Country. Just Don’t Say Anything

In Venezuela they will put up with a lot.

Beginning with their great, glorious leader, Hugo Chavez. He controls the presidency (potentially for life, or as long as he wants to run for re-election, and Jimmy Carter’s available to certify the results), the courts, the media (he just shuts down the outlets that don’t agree with him),parliament (that goes without saying) and the oil business (he nationalized the oil business and threw out the American oil companies that had build infrastructure to develop the oil leases they had purchased legally from the government). And while there are some who oppose him – at great risk to their own life and livelihood – most have remained silent.

But with the passing of a new Education Law in August, which boldly states it’s purpose of “socializing” the children of Venezuela, more people are finding their voices. 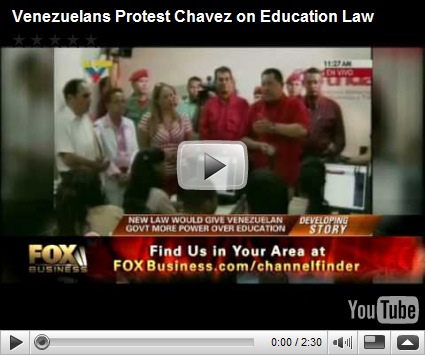 Unlike here, where socialist indoctrination in the classroom is subversive, Hugo is proud of it, and proud of his ability to demonize capitalism:

“In the capitalist society it is all about the individual here…, we are all the same. You are all being socialized.”

Nor is he the least bit shy about his goal of indoctrination of the young.

“Yes we are indoctrinating children from the first grade through college, every grade, private schools. The ideology of the revolution, the ideology of socialism – our ideology.”

Here’s an even more chilling report on the new Education Law that Chavez signed in August: the law bans the teaching of religion in  schools – public or private,  reports that the new law also will establish censorship of the press, and prohibit communications that:

"produce terror in children, incite to hatred, and offend the healthy values of the Venezuelan people and the mental and physical health of the population."

All of which will be determined by the government of course.

The new law also gives power to "community councils" to be organized and paid for by the government, which will act as "agents of education" with the "pedagogical role of liberator for the formation of a new citizenry,"

People fear that the law will allow the state to remove their children from their home if the government doesn’t feel you are educating them correctly. Chilling.

This is the man that Obama greeted warmly, and joked with at the Summit of Americas last April: 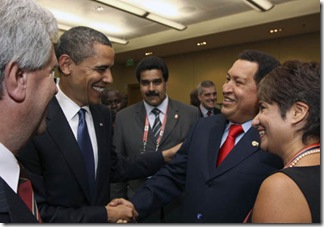 And here’s Obama’s inane explanation as to why this is what the American people elected him to do.

Why do Obama’s foes call him a socialist? Hint: it’s not because they’re racists. It’s because he agrees with this socialist dictator on too many fronts. He can’t wait to catch up with Hugo on the takeover of  healthcare, the media, energy production and the manipulation of young brains.

But still, there is one thing, one crucial mistake that Chavez has made that may yet prove to be his undoing: he has attacked golf as a bourgeois sport, and has begun to shut down golf courses across Venezuela. That might prove to be change that neither his people, or Obama, can believe in.