We’ve finally achieved the impossible: bipartisan dissatisfaction with the mainstream media. Two big opposable thumbs up to the Pew Research Center.  They’ve inadvertently done a “follow-up” piece  to my post from last Saturday  “Why Blogging Matters”.

Pew reports in its latest People & the Press survey the shocking results of the public’s assessment of accuracy in the media: “Press Accuracy Rating Hits Two Decade Low.”

Just 29% of Americans say that news organizations generally get the facts straight, while 63% say that news stories are often inaccurate.

But perhaps even more damning:

Looking at the chart of survey results going back to 1985, my lying eyes suggest that the MSM began a steep, nearly unrelenting fall around 1989. Probably coincidental, but  I seem to remember a “journalistic shift” beginning at about the same “time”:

“As the science editor at Time I would freely admit that on this issue (global warming) we have crossed the boundary from news reporting to advocacy.”
— Time Science Editor Charles Alexander at a September 16, 1989 global warming conference at the Smithsonian Institution as quoted by David Brooks in an October 5, 1989 Wall Street Journal column.

And just like mighty oaks from little ACORNs grow, 20 years hence  “advocacy journalism” has mainlined and morphed into messianic proselytizing. Such partisan advocacy results not just in simple,  gushing adoration – although we’ve certainly seen plenty of that – but the equally insidious sin of omission concerning inconvenient truths. Just this past weekend we were witness to three great examples: first the Van Jones resignation story that Howard Kurtz serves up fairly well after the fact:

By the time White House environmental adviser Van Jones resigned over Labor Day weekend, the New York Times had not run a single story. Neither had USA Today, which also didn't cover the resignation. The Washington Post had done one piece, on the day before he quit. The Los Angeles Times had carried a short article the previous week questioning Glenn Beck's assault on the White House aide. There had been nothing on the network newscasts. ..

New York Times Managing Editor Jill Abramson told readers online that the paper was "a beat behind on this story" and that while the Washington bureau was short-staffed during a holiday week, "we should have been paying closer attention."

Well, uh, yes Jill. You do claim to be the “Newspaper of Record.” Record this! Some people consider it news.

Then there is all of the non- coverage of a rather sizable gathering of peaceful citizens protesting multiple issues that they felt required redressing by the government. The on-line version of the New York Times had nothing that I could readily find about a half million strong demonstration in our nation’s capital. Ditto the sleeping alphabet soup networks. You could catch it on FOX, or overseas in the Daily Mail. Here’s a picture they published: 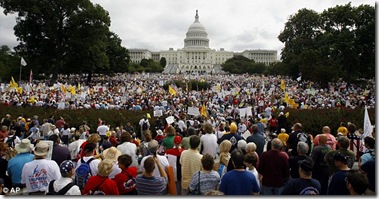 But the NYT didn’t get a chance to print any pictures. I guess their reporters were still hung over from the big Labor Day celebration, and couldn’t really focus on all that commotion.

Allegedly, The Mail also reported that protestors were carrying signs saying "King George didn't listen to us either."

And in yet another really big headline that the MSM has had precious little interest in: ACORN pimps your house, and again no one except FOX considers this a real news issue. Oh, I guess they’ll have to talk about it now because the Senate just voted to de-fund the ACORN housing operations. Although – and I just checked - still nothing on the NYT website. Probably left early for cocktails. It’s been a long day.

So, I don’t know how Tom Friedman (Pulitzer prize winning New York Times columnist) feels about having lower approval ratings than Nancy Pelosi, Congress, George W. Bush and Dick Cheney.  To the degree he believes it at all, he probably thinks us blogger-nuts in our pink bathrobes and fluffy bunny slippers are responsible.  And while I would love to think that my "open sewer of untreated, unfiltered information," contributed in some small way, unfortunately Tom, you earned the ratings completely on your own.