I Pledge To Teach Civics On The Street Corner

The Obama “I Pledge” video, an inane piece that has been around since  the election last fall, has recently been getting a lot of attention. It seems some schools in Utah have been showing it as part of their back-to-school assembly. And in conjunction with the President’s planned speech to the nation’s school kids on September 8, some parents are growing concerned over the potential for indoctrination of their children in this country. A little late, I think, to start worrying about that.

But  take a look at the pledge video first, as it sounds innocuous enough. Warning: if you don’t have a high tolerance for crap, you’ll want to turn it off well before it’s over; but if you do, you’ll miss the money quote. 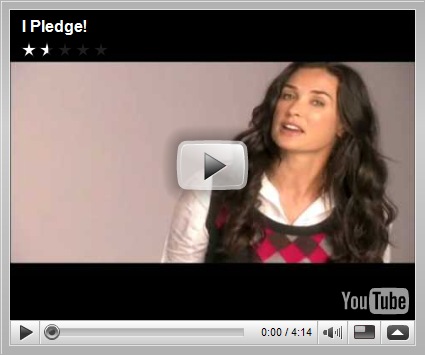 It features a bunch of Hollywood celebutards, most of whom I don’t recognize but assume to be young, dumb, rich and famous.  They are all pledging to – what? –  be better people for Barack Obama? What ever.

Here are a few examples of their pledges: “to never give anyone the finger when I’m driving again,”  “I pledge allegiance to the funk, to the united funk of funkadelica.” These two pledge-ees should get together.

Then there’s the green weenie squad. They are pledging to flush the toilet only after  they’ve been wee-weed up twice, in order to save water,  to “not  use plastic garbage bags”,  "turn the lights off", "drive slower to use less gas" and “to sell my obnoxious car and buy a hybrid.” Uh huh.

Then you have the “save the world” crowd. They want to “help make sure senior citizens have access to health care," “help end Alzheimer's”  and  “advance stem-cell research."  Somebody needs to tell these people they’re not running for Miss America.  Besides, these are pledges  that mean they want us to do something they’ve decided is the right thing to do. Most likely because somebody else told them that it was a good thing. They probably assume that we’ll appreciate having someone do our thinking for us, too.

This “public service” film  winds up with Ashton Kutcher and Demi Moore, cutest bi-generational couple around and masterminds behind the video, pledging  “to be a servant to our president.”

And there you have it: the entire ass-backward world of the intellectually lazy and/or challenged: they think they should be serving the president rather than the other way around.

So, now we have a new class of voluntary slaves. That’s what happens when you stop teaching Civics.