Why is it that people are so fascinated with the decline of our city? It’s not that Detroit is the only urban center beginning to collapse in on itself, Baltimore, Newark, Buffalo, St. Louis come readily to mind. But Detroit is different. Possibly there’s an element of schadenfreud attached to Detroit’s decline that both enthralls and repulses people. In the course of less than 50 years  –a blink in the history of a city - it plunged from the pinnacle of urban industrial prosperity to the depths of urban industrial decay: completely, indisputably, very likely irreversibly.

The latest article I’ve seen that focused on our urban nightmare is City Journal’s  Feral Detroit by Steven Malanga. He cites the phenomenon of abandoned neighborhoods being overrun by vegetation. The blog Sweet Juniper seems to have coined the term 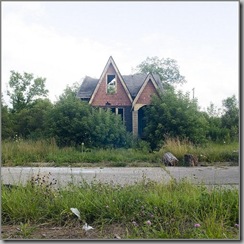 to  describe structures and even whole neighborhoods that are being reclaimed by untended vines, shrubs, trees and weeds. It contains a multitude of striking photos. Here is a small sample: 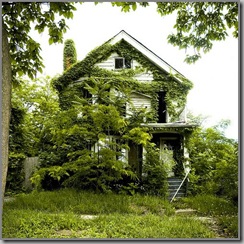 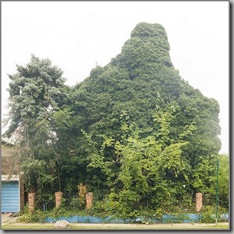 references a paper done by Edward Glaeser and Andrei Shleifer that contends  Detroit’s population decline, fundamental to its demise, was largely a self inflicted wound, caused by the “Curley Effect”:

Though some blame Detroit’s population losses on larger economic forces, economists Edward Glaeser and Andrei Shleifer argue in a groundbreaking paper that the city’s problems are mostly self-inflicted. (The paper, called “The Curley Effect,” gets its name from legendary Boston mayor James Curley, who favored Irish residents and pushed other groups out.) After winning election in 1973, Detroit’s first black mayor, Coleman Young, consolidated his power, driving white residents, who had voted against him, out of the city by withdrawing services from their neighborhoods. Eventually, Glaeser and Shleifer write, Detroit became “an overwhelmingly black city mired in poverty and social problems”—and shrinking fast.

There is much to support this version of history, not the least of which is politicians’ predilection to reward supporters and punish opponents. But regardless of where you place blame, the result is incontrovertible, as demonstrated by these photos from discarded lies – hyperlinkopotomus:

First is an aerial photo showing the density of the neighborhood around St.Cyril’s Roman Catholic church and school on Detroit’s near East side in 1949. 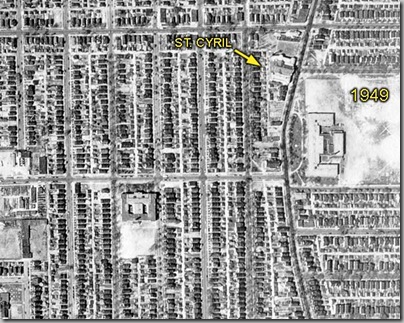 The next illustrates the same area in 2003, the year St. Cyril’s was demolished creating an even larger urban prairie in the middle of the city. 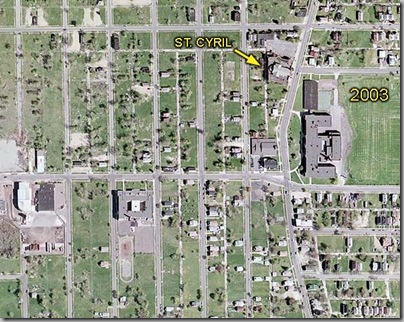 This is a photo of the ruins of St. Cyril just prior to demolition:

And here’s what stands in the near vicinity today: 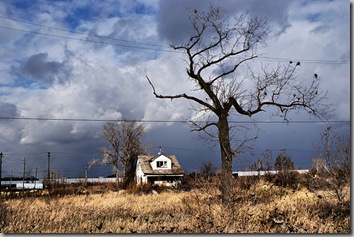 “Desolate” cannot begin to describe the emotional impact of a city that has come undone.

Tomorrow we’ll cover a growing movement to return Detroit to its roots, so to speak.

Technorati Tags: urban decay,Detroit,St. Cyril's
Posted by DEWEY FROM DETROIT at 12:47 AM