Barrack Hussein Obama continued his Far East Apology Tour this week. He continued to spend time bowing, scraping and prostrating himself in front of minor dignitaries and heads of state. His campaign to convince the rest of the world that the United States is now a third rate country seems to be gaining traction, as the Chinese seemed emboldened enough to lecture Obama on his inept handling of the economy.

But even between the stresses of the job, BHO found time to audition children for his next road show, Barrack Hussein Obama: the Musical. Mmm, Mmm, Mmm. 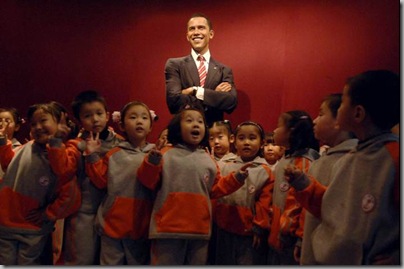 These kids will be great for the European and Far East Brown Shirt tour, since they aren’t subject to the child labor laws imposed by Western governments.