Time Doesn’t Know the Half Of It 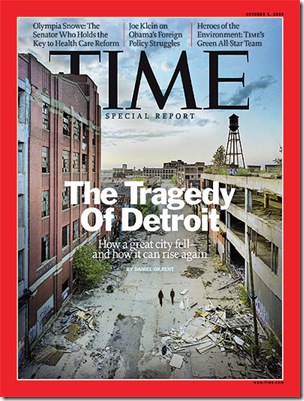 They try to present a “fair and balanced” approach – which is hard, given the facts - because they surely don’t want to blame Detroit’s demise on 50 years of failed liberal policy and leadership.

But the stories are devastating anyway: Assignment Detroit: Why Time Inc. Is in Motown, and then there’s The Detroit Blog, and finally Detroit: The Death — and Possible Life — of a Great City. We have previously documented the wrenching death knells of Detroit here, here, here and here.

But none of the above adequately tells the story of Detroit. For that you must watch this tale of three cities:

There are only a few facts required to fully comprehend the implications of this slide show. Prior to WWII, Imperial Japan had a rich culture, and very little of anything else. They pursued prosperity by warring with those who did. Post WWII, occupied Japan learned the tenets of free markets, democracy and capitalism from America. They applied them with a vengeance and created a stunningly prosperous economy, albeit with periodic business cycles of boom and bust.

Prior to WWII America applied the principles of free markets, democracy and capitalism with a vengeance and created a stunningly prosperous economy, albeit with periodic business cycles of boom and bust. Post WWII, America began to embrace it’s inner compassion for the common man. We decided that most “common” men can not make it on their own, cannot be held accountable for either their situation or salvation. With good intentions galore we created a class of people that are now moving into their third generation dependent upon the government for their sustenance.

And still, half the country fails to see the cause and effect of these well intentioned policies that kill initiative, kill spirit, kill self-determination, kill major cities and will kill America if we continue along this path.

Why is this so hard get?

So far, the periodic business cycles of boom and bust have continued. We pray we continue to have booms, so everyone can whine about the wretched excess of the culture, and vote to increase the taxes on the “rich” so we can afford to continue the compassionate caring for the next 3 generations of wards of the state.

Update 11/30/09: SaltShaker has correctly noted that the alleged pictures of Hiroshima and Nagasaki 2009 are actually pics of Yokohama. Review of actual current photos of the two cities show them to be sturdily and aesthetically rebuilt. Which is more than can be said of Detroit.

Apologies for passing on what is apparently a hoax photo essay, but the morality play aspect of the comparison is still valid.

So just a reminder: “Believe none of which you hear, and only half of what you see.”

Posted by DEWEY FROM DETROIT at 10:10 PM