Health Care For Me, But Not For Thee

Kathleen Sebelius appeared a little punch drunk at the Senate hearings yesterday. No truth to the rumor that she took one for the team.  Although the plummeting health care approval polls combined with the lagging delivery of flu vaccines – swine and otherwise – does make the swollen eye suspect. 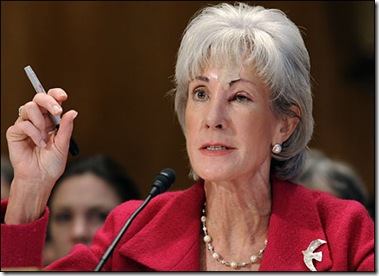 In reality, Ms. Sebelius had a  slow growing basal skin cell removed from her forehead, causing the eye puffiness.

According to a HHS spokeswoman, "She is back fighting to get everyone the same good health care she has." We can’t help but wonder for how long: “the good health care” part, not the fighting.

It’s probably coincidence, if you believe in such things, that the New York Times released an article today, immediately picked up by the science journal of record, NPR, that basically questions the wisdom of  early cancer screening tests. Here, from NPR:

The American Cancer Society is rethinking its stance and working on a more nuanced message that would say screening for breast, prostate and some other cancers carries its own risks: overtreating small and fairly unthreatening cancers.

I don’t know about you, but my shit detectors start flashing whenever I hear any bureaucrat talk about “nuancing” anything. It generally means that whatever follows is going to be deceptive, biased, or simply untrue. I doubt that this is the exception that makes the rule.

Here’s a little exercise for you. Can you figure out what might possibly be wrong with this statement from the NYT article regarding the analysis published Wednesday in The Journal of the American Medical Association.

In it, researchers report a 40 percent increase in breast cancer diagnoses and a near doubling of early stage cancers, but just a 10 percent decline in cancers that have spread beyond the breast to the lymph nodes or elsewhere in the body. With prostate cancer, the situation is similar, the researchers report.

Hmmm. I think I have a few questions. Could it be that they doubled the number of early stage cancers that were caught, hence preventing the spread beyond the breast by early treatment? And of the ones that did spread: what percent had early screening? Also how old were the victims whose cancers spread? And had they had any cancer before? Is the increase in diagnoses due simply to additional screening? When the number of children diagnosed with autism increased sharply, I didn’t hear anyone in the field claiming that it was simply due to earlier and better diagnosis (or an expanded definition of autism). The claim was, and still is, that it must somehow be environmentally triggered. Could that be true of breast and prostate cancers too then? I’m just asking. I’m just a blogger.

It’s not a study I’d be willing to sign off on. If nothing else, the timing seems odd. But as we all know, if you want people to swallow something you have to start the sales job early. Tell them about it early, tell them again. And again, and then you must repeat steps one thru three.

The first whiff of this new tack that the National Institute of Health was on came last spring with it’s release of a report on the ineffectiveness of the PSA test. Here’s a jaundiced-eyed post I did at the time regarding that flawed study. This new “analysis” is more of the same drivel.

It’s a preliminary step to impose cost-containment once the public option is the only option. Do not ignore these pseudo-scientific “studies” done by semi-governmental entities. The danger here, like so many things in this administration, is insidious.

This is the proverbial tip of the iceberg.