More On Our Great Historic Leader

Tammy Bruce shares a few of Charles Krauthammer’s choice words regarding Obama’s trip overseas with us, and encourages us to do the same. So here it is: enjoy. 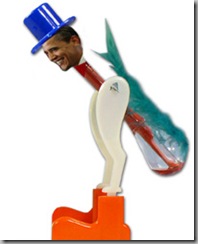 “Well, that was definitely a world class bow in Tokyo.

…there was a second incident that I found interesting when the President declared himself the first Pacific President. That’s because he grew up and spent some of his childhood in Hawaii, and in Indonesia and his mom took him on a visit to Japan, although all he remembers of that, as he says, was the ice cream. The first Pacific President? Well, Teddy Roosevelt, he built the Panama Canal in order to make the United States a Pacific power and he did. William Howard Taft, his successor, was the governor of the Philippines and John Kennedy and George Bush, Sr. were in the Pacific in the Second World War and spent some time in the Pacific Ocean itself. Bush, after having been shot down from his airplane and Kennedy after having his ship cut in half by a Japanese patrol boat. So these people actually spend time in the Pacific, but in Obama’s mind, it doesn’t in any way match the experience of the baby Jesus — excuse me, the baby Obama growing up on some Pacific island. The narcissism of the man is rather unbounded.

Everything in Obama’s life makes him world historical.” 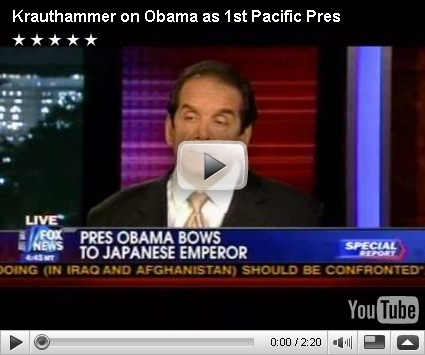 But it’s not about him.

Posted by DEWEY FROM DETROIT at 11:30 AM