You’ll never forgive yourself if you don’t read this little story.

But if you’re in a hurry, here are the highlights (there aren’t many):

The president of the United Nations General Assembly, Rev. Miguel D’Escoto Brockmann, on Saturday declared Bolivian President Evo Morales as “World Hero of Mother Earth” in a ceremony at the presidential palace in this capital.

With a medal and a parchment scroll, the General Assembly of the United Nations Organization named Morales “the maximum exponent and paradigm of love for Mother Earth” 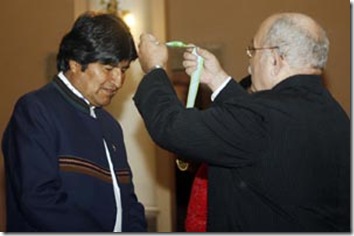 For starters, I can just tell you that Al Gore is going to royally torqued off. He thought he had that award in the bag. Secondly, since Evo is a long time grower of Coca (as in cocaine, not Hershey’s), I think it goes without saying that he’s going to worship the ground it springs from.

Besides Morales, the former Cuban head of state Fidel Castro has been named “World Hero of Solidarity” and the late ex-president of Tanzania, Julius Nyerere, will be honored as “World Hero of Social Justice.”

Castro? Solidarity? Of what? Owners of gently used American automobiles, c. 1950-61? Survivors of 45 years of continual economic contraction? And I guess we can ignore the executions and imprisonments of Fidel’s enemies and opponents. Because they weren’t really in solidarity now, were they?

By comparison Nyerere is a saint: he was simply a proponent of African Socialism which he understood to be the closest economic system to the centuries-old African tribal system. He was right of course. That’s why Africa is still starving. But surely that “social justice” thing’s working out pretty well over there. Anyone from Darfur care to comment? Rwanda? Somalia? Any one?


What we want to do is present these three people to the world and say that they embody virtues and values worth emulation by all of us,” said D’Escoto, who like the socialist Morales is a staunch critic of U.S. foreign policy in Latin America.

So let me see if I have this straight: The United Nations wishes us to emulate all the murderous, cocaine growing socialists that worship Gaia and hate U.S. foreign policy?  Got it.

Now I’m not sure how they’re doing math these days in the enlightened global world of the UN, but last time I looked you could add up Bolivia’s, Tanzania’s and Cuba’s contributions to the  UN and it would get lost in the rounding of the United States’ contribution.

Don’t you  think that eventually it will occur to the Marxist Goose-steppers over on the United Nations Plaza that if they push this socialist crap too far, they’re going to kill the goose that lays one of the few golden eggs in their nest?