George W. Bush: Whatever Else You Think of Him, He Kept Us Safe

He was not an icon of conservatism as we may have hoped for. He certainly couldn’t even be counted on in the right hand column when it came to fiscal conservatism.

But no matter what your other complaints about George W. Bush, it must be said, and remembered, that he kept us safe.

And while he did, while the Enemy Within rained hell on him, this uncommonly decent man stood firm as he grew old before our eyes.

There will come a time when people will look back in history at George W. Bush and say of him:  despite great adversaries, despite unyielding opposition and in the face of severe criticism, this man acted in accordance with his moral code and conscience to keep the country safe. It remains to be seen if we can keep ourselves whole. 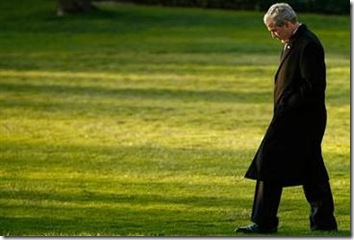 John Nolte’s piece in Big Hollywood is worth reading, if for no other reason than we’ve begun to be complacent about our safety again.  And regrettably, we can’t.

Posted by DEWEY FROM DETROIT at 1:45 AM