This Fever Could Prove Fatal

It’s one AM Monday morning on the weekend before Christmas. Do you know what your Senate is voting on? No, and that’s the whole point.

But don’t be concerned. Our future is in good hands.

Never mind that Ben Nelson proved to be as principled as a hooker in need of a fix. As it turned out, his objection had less to do with right to life and more to do with jealousy that Mary Landrieu got more toys and candy in her sock than he did. But he held out and it was worth it. He got a waiver in perpetuity for the state of Nebraska’s new Medicaid payments related to Obamacare. That’s, like, forever! So take that Mary Landrieu. He’ll get your measly $300 million in the first year! Amateur.

But try to get past all that, and forget the nagging little concern that Nelson’s deal – or maybe even the whole healthcare bill –may be unconstitutional. Our betters will let us know what is and isn’t constitutional from now on.

If you’re concerned that what used to amount to horse-trading in the Senate has now taken on the trappings of felony bribery, you can lay that fear to rest too. Senators have simply co-opted the lobbyist system that they love to hyperventilate against at re-election time when people start yammering about special interests buying their votes. It’s like bribery, only legal. Besides, as Mark Steyn points out, if you’re bribing a judge or a politician, you have to use your own money. In Congress, they just use ours.

You will also have to ignore the the fact that the regime which promised complete transparency in government refuses to release the Senate bill from Harry Reid’s committee to the other senators, let alone you. 2,100 pages of stipulations, requirements, exceptions, contortions and unadulterated BS and we, the people, will not be allowed to see it before the Senate votes on it. 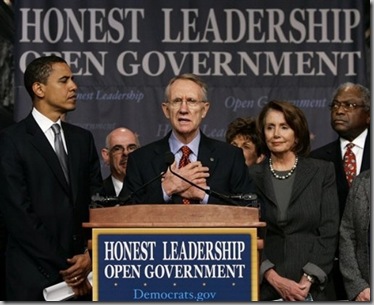 I guess that tells us where we (the little people) fit into Harry’s world. And it also tells us how much napalm is contained in the bill: too hot to handle. Just pass it on and stand clear.

Also, let’s not worry about the fact that the CBO scoring of the cost of the Senate bill at $849 Billion is a crock of lies. (CATO Institute estimates that is only 40% of the real cost) For starters, any legislation that collects increased taxes for four years before providing any benefits to the citizenry, and then has the audacity to cite a net 10 year cost is ludicrous on its face. You would be laughed out of Accounting 101 with that kind of matching, or thrown in jail if you were running a company.

Secondly, it doesn’t even pretend to price the immediate increase in costs in the private sector, beginning with increased insurance premiums that everyone will have to pay. Because you can’t mandate that insurance companies eliminate pre-existing condition clauses (Which will allow irresponsible people to opt out of the insurance pool until such time as they are diagnosed with a really costly ailment: it’s called adverse selection for a reason.) without expecting the cost of providing “insurance” to go up.

It also doesn’t recognize the cost of the “Dr. fix” which has added additional, unbudgeted, costs back to Medicare for years now because no one in Congress has the chutzpah to actually enforce the terms of the bill that they all voted into law. (In essence, the “Dr. fix” reinstates doctors reimbursements to  former Medicare levels, overriding lower reimbursement rates legislated in order to claim “savings” in Medicare funding. It’s simply another congressional slight of hand that we are not supposed to notice. Doctors contend that the rates established in current legislation – before the “Dr. fix” are below their actual cost of service, therefore making the legislation another work of genius.)

Notwithstanding the above, you can also ignore the fact that the CBO now says they made (another) half trillion dollar error in calculating the size of the budget deficit reduction that supposedly accompanies the healthcare bill. Why? Because the estimates are really nothing more than wild-ass guesses anyway. You might as well make your own forecast: the odds of you being correct are just as good. As Karen Tumulty at Time notes: “If CBO can't keep up with what is getting slipped into this bill, what hope is there for the rest of us?”

Olympia Snow uttered her first intelligent thought in years yesterday. She observed that the Senate was on course to rush the healthcare bill through on Christmas Eve with no opportunity for anyone to offer amendments, indeed, no opportunity to even read it , “ …  so that we can adjourn for a three-week recess for a bill that doesn't become implemented until 2014" . Gee, I wish that possibility would have occurred to her before she voted it out of committee – the only time her vote could have possibly mattered.

But Obama says his healthcare bill will cut our deficit. That’s just a lie. It will increase the deficit, it will increase costs, it will result in higher taxes and higher cost of insurance premiums and every other consumer good or service provided by a company that pays health care premiums. But Obama and his stooges think that we are so stupid we will swallow the mealy-mouthed political gruel being regurgitated by our betters for our consumption.

The president is proud that his legacy legislation is going to “bend the healthcare cost curve.”  Unfortunately, it’s not going to bend in the direction he anticipates. The infamous “Hockey Stick Graph” is accurate after all. It just applies to health care costs, not global warming. It’s just one grand hoax after another around here.

Mann’s “Hockey Stick” graph: the most discredited artifact in the history of science.

Posted by DEWEY FROM DETROIT at 7:15 PM