I wonder if  President Obama is reconsidering his A and A (appearance and appeasement) gig in Copenhagen later this week? It is becoming awkward - now that people are actually reading those leaked Climategate emails. Here’s my favorite so far, via Mark Steyn:

Yet perhaps the most important revelation is not the collusion, the bullying, the politicization and the evidence-planting, but the fact that, even if you wanted to do honest “climate research” at the Climatic Research Unit, the data and the models are now so diseased by the above that they’re all but useless. Let Ian “Harry” Harris, who works in “climate scenario development and data manipulation” at the CRU, sum it up. Mr. Harris was attempting to duplicate previous results—i.e., to duplicate all that science that’s supposedly settled, and the questioning of which consigns you to the Climate Branch of the Flat Earth Society. How hard should it be to confirm settled science? After much cyber-gnashing of teeth, Harry throws in the towel:

“ARGH. Just went back to check on synthetic production. Apparently—I have no memory of this at all—we’re not doing observed rain days! It’s all synthetic from 1990 onwards. So I’m going to need conditionals in the update program to handle that. And separate gridding before 1989. And what TF happens to station counts?

“OH F–K THIS. It’s Sunday evening, I’ve worked all weekend, and just when I thought it was done I’m hitting yet another problem that’s based on the hopeless state of our databases. There is no uniform data integrity, it’s just a catalogue of issues that continues to grow as they’re found.”

Thus spake the Settled Scientist: “OH F–K THIS.” And on the basis of “OH F–K THIS” the world’s enlightened progressives will assemble at Copenhagen for the single greatest advance in punitive liberalism ever perpetrated on the developed world.

Despite the fact that Copenhagen is the biggest Robin Hood scheme of all times, we still have the east coast elite telling us hayseeds in fly-over that we can ignore the pesky little emails that might indicate a tad of a problem with a bit of the data. The earth is still in full melt-down mode: Who you gonna believe? Me, or your lyin’ eyes? Let’s ask Tom Friedman. He talks down to the unwashed masses in a most annoying and unctuous way. This from CNN’s Situation Room with Wolf Blitzer, via Ed Driscoll, (who’s post today fairly eviscerates Mr. Friedman):

FRIEDMAN: Well, clearly, the skeptics and deniers are saying to use these e-mails to say all the research is wrong. Let’s see, all the research, from all the research centers in the world, built up over 50 years, is wrong? Because a couple of climate scientists talking to each other in private- you know, based on statements that they probably wished they had rephrased- sorry, Wolf, I don’t buy it….I’m disappointed with the language they [the scientists who wrote the leaked ClimateGate e-mails] used…But I’m not focused on them. Wolf. I’m focused on the fact that we know for the last 1,000 years- okay, that the amount of CO2 in the atmosphere has stayed steady. We also know since the Industrial Revolution, it suddenly spiked, and with that spike, [there] has been a spike in global average temperatures. We know that, okay. We know that for multiple sources.

Tommy, you don’t know squat. But he continued to inform Wolf on China (because he’s an expert on international economics):

And, by the way, Wolf, you know who’s not debating this nonsense at all? China. China’s not debating this at all. They know their glaciers are melting. They know something’s happening. And you know what they’re trying to do? They’re trying to clean our clock in solar, wind, [unintelligible], because they know it’s happening. They’re not caught up in this idiot debate, and that’s where we should be.

The Chinese are most assuredly not caught up in this “nonsense,” this “idiot debate” over whether man-made global warming is real. They’re too busy making all that cheap crap that they sell to us. Have you wondered how they manage to make that crap so cheaply? No, it’s not just cheap labor, although they’ve got that too. It’s also because they still operate by turn of the century – 20th, not 21st – industrial pollution standards. Do you think a country that’s interested in global warming would operate their industries like this?  And how’s this for irony that any progressive should find amusing: some of the worst pollution is caused by the manufacture of “green” solar panels.

The first time Li Gengxuan saw the dump trucks from the nearby factory pull into his village, he couldn’t believe what happened. Stopping between the cornfields and the primary school playground, the workers dumped buckets of bubbling white liquid onto the ground. Then they turned around and drove right back through the gates of their compound without a word.

This ritual has been going on almost every day for nine months, Li and other villagers said.

In China, a country buckling with the breakneck pace of its industrial growth, such stories of environmental pollution are not uncommon. But the Luoyang Zhonggui High-Technology Co., here in the central plains of Henan Province near the Yellow River, stands out for one reason: It’s a green energy company, producing polysilicon destined for solar energy panels sold around the world. But the byproduct of polysilicon production — silicon tetrachloride — is a highly toxic substance that poses environmental hazards.

“The land where you dump or bury it will be infertile. No grass or trees will grow in the place. . . . It is like dynamite — it is poisonous, it is polluting. Human beings can never touch it,” said Ren Bingyan, a professor at the School of Material Sciences at Hebei Industrial University.

Where’s the BBC documentary on this? The PBS expose and the call for a boycott of Chinese products? I’ll wait. Maybe the Sundance film festival documentary category will be all over it this year.

But Tom Friedman is still salivating over the Chinese prowess in his hot, flat and crowded world. As he opined in his column last fall, again via Mark Steyn:

The New York Times's Thomas Friedman finally gets to where he's been wanting to go all these years. Everything would be so much better if we could just submit to the benign rule of an enlightened elite:

“One-party autocracy certainly has its drawbacks. But when it is  led by a reasonably enlightened group of people, as China is today, it can also have great advantages. That one party can just impose the politically difficult but critically important policies needed to move a society forward in the 21st century.”

The bookshelves are filled with books written about the “drawbacks” of one-party autocracies, The Rise and Fall of the Third Reich to name one. Maybe Friedman should take it along on his next vacation. If he likes it, perhaps he can loan it to his best bud,  President Obama, for his next vacation on Martha’s Vineyard. 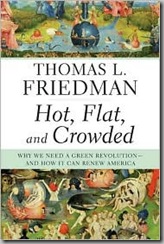 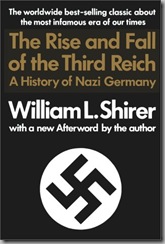 H/T  “China’s Not Debating This At All”  from Ed Driscoll.com

Posted by DEWEY FROM DETROIT at 5:14 PM