Who would’ve  guessed that Barry could do such a convincing impersonation of Al Gore. I guess I shouldn’t be surprised, since they’re both idolized by the insane clown posse that bows at the altar of Global Warming. 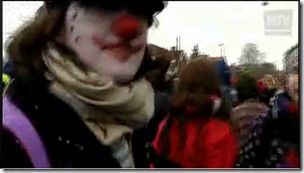 Here is the complete, annotated for clarity, text of President Barack Obama's remarks Friday at the U.N. climate summit in Copenhagen:

Good morning. It's an honor to for me to join this distinguished group of leaders from nations around the world. (Although the real honor is yours.)  We come together here in Copenhagen because climate change poses a grave and growing danger to our people. (And once people stop believing that, we will not be able to use this crisis to redistribute the wealth of the developed world to tin pot dictators across the planet) All of you would not be here unless you, like me, were convinced that this danger is real. (or there was political benefit to pretending to be convinced) This is not fiction, this is science. (science fiction)Unchecked, climate change will pose unacceptable risks to our security, our economies, and our planet. This much we know. (has anyone shown Barry the emails from CRU?)

So the question before us is no longer the nature of the challenge. (Some of us still have questions - global warming: is it happening or not? If it is, is it man-made or natural? Question for the AGW morons in Copenhagen: do you think 2500 degree lava eruptions under sea could possibly raise the temperature of the oceans?) The question is our capacity to meet it. For while the reality of climate change is not in doubt, I have to be honest, I think our ability to take collective action is in doubt right now (thank God for small favors) and it hangs in the balance.

I believe we can act boldly, and decisively, in the face of a common threat. (How about we save it for nuclear maniacs like Ahmadinajad?) That's why I come here today. Not to talk, but to act. (This should be good, way out of Barry’s comfort zone.)

Now, as the world's largest economy (not for long) and as the world's second largest emitter, (with any luck we can drop way further down the list after we close up the rest of our manufacturing facilities.) America bears our responsibility to address climate change, and we intend to meet that responsibility. That's why we've renewed our leadership within international climate negotiations. (I’ve come to lead you out of darkness.) That's why we've worked with other nations to phase out fossil fuel subsidies. That's why we've taken bold action at home by making historic investments in renewable energy; by putting our people to work increasing efficiency in our homes and buildings; (weatherizing with sexy insulation) by pursuing comprehensive legislation (cap and tax) to transform to a (third world ) clean energy economy.

These mitigation actions are ambitious, and we are taking them not simply to meet global responsibilities. We are convinced as some of you may be convinced that changing the way that we produce and use energy is essential to America's economic future that it will create (or save) millions of new jobs, power new industries, keep us competitive, and spark new innovation (over seas). We're convinced for our own self-interest (i.e., my historic re-election in 2112) that the way we use energy is essential to America's national security, because it will reduce our dependence on foreign oil, and help us deal with some of the dangers posed by climate change.

So I want this plenary session to understand: America is going to continue on this course of action to mitigate our emissions and move toward a clean energy economy. (by taxing the crap out of our businesses and our citizens) No matter what happens here in Copenhagen , we think it is good for us, (can we take a roll-call vote of the citizens?) as well as good for the world. But we will all be stronger and all be safer and all be more secure if we act together (and pass my healthcare bill). That is why it is in our mutual interest to achieve a global accord in which we agree to certain steps, and to hold each other accountable to certain commitments. ( Just like I hold myself and my administration accountable.)

After months of talk, and two weeks of negotiations, after innumerable side meetings, bilateral meetings, endless hours of discussion among negotiators, I believe that the pieces of that accord should now be clear. (and yet, just like my healthcare bill, they’re not)

First, all major economies must put forward decisive national actions that will reduce their emissions, and begin to turn the corner on climate change. I'm pleased that many of us have already done so. Almost all the major economies have ... and I'm confident that America will fulfill the commitments that we have made: cutting our emissions in the range of 17 percent by 2020, and by more than 80 percent by 2050 in line with final legislation. (With the economic path we’re on we’ll be down at least 80%, at least by 2050. I’m betting sooner.)

Number two. We must have a mechanism to review whether we are keeping our commitments, and exchange this information in a transparent manner. (and if you’ve been paying attention to my health care takeover initiative in Congress, you’ll know what I mean by transparent) These measures need not be intrusive, or infringe upon sovereignty. (although they most surely will) They must, however, ensure that an accord is credible, and that we are living up to our mutual obligations. Without such accountability, any agreement would be empty words on a page. (heh, heh, heh. See how that works?)

I don't know how you have an international agreement where we all are not sharing information and assuring that we are meeting our commitments. (It’s like having “global warming” and not sharing all of the actual data. Mistakes could be made.) That doesn't make sense. It would be a hollow victory. (the best kind, given the circumstances)

Number three. We must have financing that helps developing countries adapt, particularly the least-developed and most vulnerable countries to climate change. (Because some day, that will be us. Plus, I own a bunch of banks that have a lot of experience lending money to people who have no means or intention of paying it back) America will be a part of fast-start funding that will ramp up to $10 billion in 2012. And, yesterday, Secretary of State Hillary Rodham Clinton made it clear that we will engage in a global effort to mobilize $100 billion in financing by 2020, if and only if it is part of a broader accord that I've just described.(oohhhh! Is that a hollow threat?)

Mitigation. Transparency. And financing. It's a clear formula, one that embraces the principle of common but differentiated responses  and respective capabilities. (From each according to his means, to each according to their needs.) And it adds up to a significant accord, one that takes us farther than we have ever gone before as an international community. (New world order?)

I just want to say to this plenary session that we are running short on time. (TOTUS just advised I’m almost out of words and sentences) And at this point the question is whether we will move forward together, or split apart. (Again, can we have a roll-call vote?) Whether we prefer posturing to action. (posturing) I'm sure that many consider this an imperfect framework that I just described. No country will get everything that it wants. (Do I sound like Solomon yet?)

There are those developing countries that want aid with no strings attached, (kind of like ACORN) and no obligations with respect to transparency. (like Congress) They think that the most advanced nations should pay a higher price. I understand that. (being a New World Order guy) There are those advanced nations who think that developing countries either cannot absorb this assistance, or that will not be held accountable effectively, (“food for oil” set off any alarms?) and that the world's fastest-growing emitters should bear a greater share of the burden. (but we feel too guilty to suggest something that reasonable)

We know the fault lines because we've been imprisoned by them for years. (thank goodness for small blessings) These international discussions have taken place now for almost two decades. And we have little to show for it other than increased acceleration of the climate change phenomenon. (Can I see the data backing that assertion?)

The time for talk is over. (Because I see TOTUS’ reminder that I’m 45 seconds away from the end of my read) Here is the bottom line: We can embrace this accord, take a substantial step forward, and continue to refine it and build upon its foundation. (Just like we’re  going to have to do with my historic health care bill – but getting the camel’s nose in the tent is all we need)  We can do that, and everyone who is in this room will be part of a historic endeavor, one that makes life better for our children and grandchildren. ( If by better, you mean less affluent, less free and probably dumber)

Or we can choose delay, falling back into the same divisions that have stood in the way of action for years. (and I will leave Copenhagen empty handed again, so how about that historic roll call or just a simple unanimous consent.) And we will be back having the same stale arguments month after month, year after year, perhaps decade after decade, all while the danger of climate change grows until it is irreversible. (News flash: the sun, and it’s solar activity, has more impact on earth’s climate than all the “tea” in China. Climate change is irreversible. And we do not control it.)

Ladies and gentlemen, there is no time to waste. America has made our choice. ( Did I miss the roll-call vote?) We have charted our course, we have made our commitments, we will do what we say. (Elections do have consequences) Now, I believe it's the time for nations and the people of the world to come together behind a common purpose. (aka New World Order)

We are ready to get this done today but there has to be movement on all sides to recognize that it is better for us to act than to talk. Better for us to choose action over inaction; the future over the past. With courage and faith, I believe that we can meet our responsibilities to our people, and to the planet. (blah, blah, blah)

Thank you very much. (You may now go back to demonstrating in the streets against the Capitalist ghosts. I may join you later.) 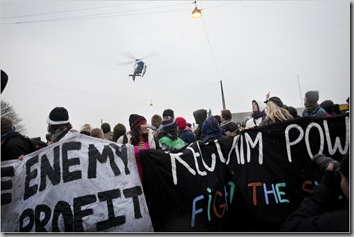 Posted by DEWEY FROM DETROIT at 11:37 AM