Did I hear this correctly? Did President Obama actually say this in his Nobel Peace Prize Acceptance Speech?

"Evil does exist in the world." A nonviolent movement could not have halted Hitler's armies. Negotiations cannot convince al Qaeda's leaders to lay down their arms. To say that force is sometimes necessary is not a call to cynicism -- it is recognition of history; the imperfections of man and the limits of reason."

Is it possible that the President’s teleprompter (aka TOTUS) got his texts mixed up? The Oslo speech sounded more like the speech he should have given at West Point.

And the strangely unsettling West Point speech would have been more in keeping with the speeches Obama has previously given on foreign soil: apologies for past grievances,  praise for our enemies and threading the needle in an attempt to appease all comers.

But the Oslo speech adopted a new tone. No pot-shots at George W. Bush and his “war of choice,” no mention of what a wonderful religion Islam is, no claim that  “we have forged a new beginning between America and the Muslim World – one that recognizes our mutual interest in breaking a cycle of conflict…”. Good, because the Muslims that wish to destroy us do not recognize this newly forged beginning. No trying to have it both ways. Also good, because in a war against evil you cannot have it both ways.

To be fair, the West Point speech included a lot of great rhetoric about American exceptionalism that rang of FDR. He echoed Colin Powell by noting that America has never asked for anything other than a place to bury our dead in return for our sacrifices in fighting for other nation’s freedom. He cited the spirit of the American people that built our economy, who create jobs and who burn with entrepreneurial zeal and creativity. His closing remarks could even have been something George W. Bush might have said:

We will go forward with the confidence that right makes might, and with the commitment to forge an America that is safer, a world that is more secure, and a future that represents not the deepest of fears but the highest of hopes. Thank you, God Bless you, God Bless our troops, and may God Bless the United States of America.

The problem of course is that it didn’t ring true. In the same speech he accused us of a reckless war and practicing torture. He said America will always champion human rights, but he has turned his back on the murder of Iranians protesting a fixed election. He said nothing to China about their human rights violations. He supported a corrupt leader in Haiti who was thrown out of office by terms of their own constitution, and he cavorts with tyrannical dictators like Castro and Chavez. He praised American entrepreneurial drive, but every policy and piece of legislation enacted since he took office is anti-business, anti-capitalism and anti-free market. He praises our troops in one breath but undermines them in the next by announcing an expiration date on our commitment to the campaign in Afghanistan.

How is this man to be taken at his word? His on-prompter eloquence sounds like a Hollywood screenwriter’s best effort at a script for a “a great historical leader.” Maybe the problem is Obama is just not a good enough actor to pull it off.

The West Point speech did not play well, and seemed to satisfy no one. Is it possible that the Won is taking a page from the Clinton era and relying more on polling data to shape his opinions, with the Oslo speech being the face of the latest metrics? I guess we should take that as a good sign. Better a politician of malleable principals than an ideologue committed to a Marxist/socialist agenda.

The Oslo speech ushers in a new bent if for no other reason than the only apology that Obama offered was for his unworthiness to receive the award. A view apparently shared by 79% of the rest of Americans.

Two sides of the same coin: 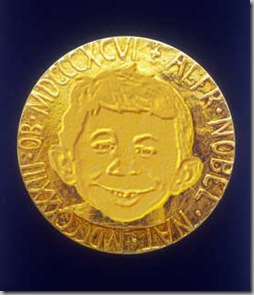 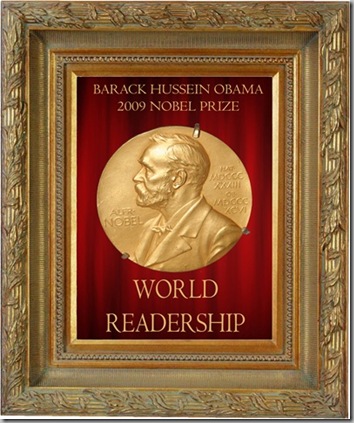 Posted by DEWEY FROM DETROIT at 1:05 PM