The Neanderthal world is laughing at our civilized world as we willingly follow the parade of clowns down the politically correct, multicultural path to the guillotine. Three full days after a Nigerian terrorist failed, due only to his own incompetence and the intervention of a brave Dutch tourist, to blow up a Northwest Airlines flight over Detroit, the President of the United States interrupted his vacation to give us a speech read about the attack. 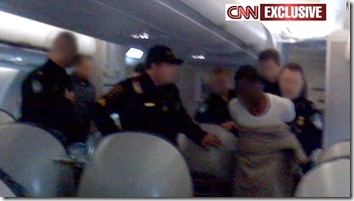 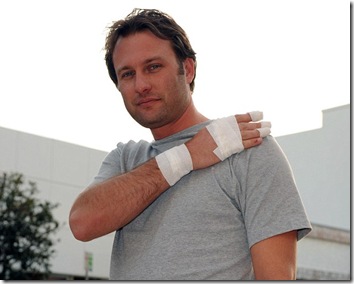 Dressed in the resort high-casual style of a CEO welcoming employees to an off-site retreat - and only after test marketing themes on the supportive press Sunday shows - Obama attempted to reassure Americans that they are safe. Sounding more like a prosecutor carefully outlining a pending indictment, he did little to show he has any understanding of the threat posed by Islamic terrorists, and nothing to show he has the fortitude or will to confront it.

Most troubling to us (Team Dewey’s curriculum vitae includes airport security) is the new “In Flight” procedures contained in the “Security Directive” ordered on December 25th by Homeland Security:

1. During flight, the aircraft operator must ensure that the following procedures are followed:

These “security procedures” are tacit admission that this administration can NOT, or will NOT keep bombs off of commercial aircraft.

They are intended to focus on the part of the system that Janet Napolitano concluded “worked”: the incompetence of the terrorist and the bravery of the Dutch tourist. Procedures 1, 2 and 5 are robust restrictions that will make it much more difficult, during the last hour of the flight, for a terrorist to access and/or detonate the bomb they brought through “security screening. At a minimum, it will make it easier for passengers to see what Abdul is up to, before they are required to resort to self-help procedures. “Security Procedures” 3 and 4 are my favorites, as they will prevent the terrorists from knowing exactly where the plane is. Unless Abdul looks out the window. Or has been advised by someone who has previously flown the route approximately how long the flight takes to reach its destination. Or he doesn’t really care where he is, as long as it’s over land.

We are reminded of a previous, equally robust “security procedure” (still in effect, so it must work) that prevented anyone without an airline ticket from entering the “sterile area” beyond the security screening checkpoints (one of the safest places in Detroit by the way). This procedure assumes terrorists do not know that they need an airline ticket, in addition to their bomb, to board a flight. 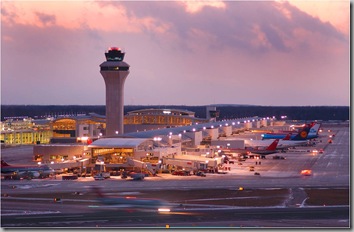 We’ve been highly critical of U.S. aviation security procedures since their inception in the 1970’s. In the 90’s, an aviation security consultant, and former Israeli intelligence officer I knew described U.S. airport security as “…a childish attempt to give the appearance of security for public relations benefit, by harassing, inconveniencing and mistreating its citizens… and utterly incapable of securing an aircraft.”

President Obama agrees. And thinks that it’s a good idea. 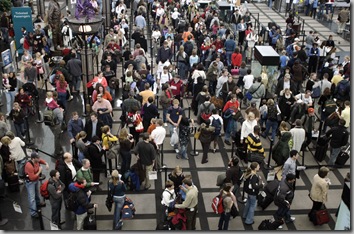 He concludes, therefore, that you will always be safe if you bring your own bomb.

Who would have thought bureaucrats would make it so easy to fly safely? Now if only they could work on making the skies friendly again.

So now we know why we saw something akin to emotion from Obama at his second vacation read yesterday concerning the panty-bomber. According to the New York Times, we (that would be the US government) were apparently advised by Yemen that a Nigerian man would attempt to blow up an American airliner on Christmas Day. Oh, oh! Were those dots? Was the dot connector on holiday? Let’s see: Nigerian, al-Queda? That sounds like middle-aged blonde grandmother, right?

An editorial today in the NY Daily News says:

Even so, Obama's description of Abdulmutallab as an "isolated extremist" was remarkable and disturbing. This radicalized young Nigerian is nothing of the sort. He operated, in fact, as an Al Qaeda-recruited, Al Qaeda-supplied, Al Qaeda-directed foot soldier - as, to put it directly, an enemy combatant, and not as the criminal "suspect" of Obama's description.

Enemy combatant? Wow, that sounds so… so, Bush-like.

Maureen Dowd called the President Spock-like, and complained that he was elected because he was so new-school, but is now looking same-old, same-old.

Instead of modernity, we have airports where security is so retro that taking away pillows and blankies and bathroom breaks counts as a great leap forward.

If we can’t catch a Nigerian with a powerful explosive powder in his oddly feminine-looking underpants and a syringe full of acid, a man whose own father had alerted the U.S. Embassy in Nigeria, a traveler whose ticket was paid for in cash and who didn’t check bags, whose visa renewal had been denied by the British, who had studied Arabic in Al Qaeda sanctuary Yemen, whose name was on a counterterrorism watch list, who can we catch?

She should have added, “with all of these false security measures.” She concludes with what should have been obvious to all:

In his detached way, Spock was letting us know that our besieged starship was not speeding into a safer new future, and that we still have to be scared.

And until such time as we reject the politically correct nonsense world that insists a Scandinavian grandmother is as likely to want to blow us up as a young black Muslim man, we will continue to live in a very dangerous world.

And don’t even bother whining that you want to be submitted to a full body scanner before you can board an airplane. It appears al-Queda is way ahead of us on that intrusive security measure too. 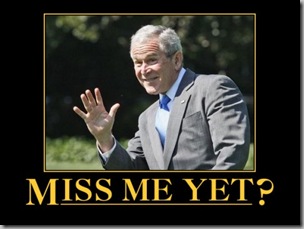 LiveJournal Tags: Airport security,detroit,panty bomber
Posted by DEWEY FROM DETROIT at 12:06 AM