If you’ve lost Mitch Albom you’re in big trouble, my man. You may know him for his sports/pop culture column at the Freep, his ESPN commentary, his story about his dying professor Tuesdays With Morey, or his treacley novels. 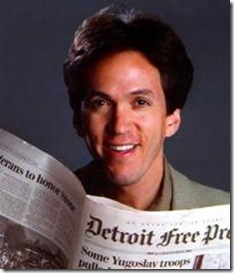 But around here we know him as the token liberal on conservative WJR talk radio, jammed between Sean Hannity and Mark Levine during early evening drive time.

So when Mitch – whom we must assume to be rich after all those life-time achievements –comes out swinging and accusing the Chosen One of class warfare: well, you’ve got trouble in NoMotown.

Can Hollywood be far behind? Given Motown’s demise, I’m betting they have a lot more of the top 1% earners than we do. I know the glitterati didn’t think they were paying enough in taxes last year. They couldn’t wait to elect a president who would lift their dual burdens of white guilt and rich white guilt. But wait till they hear from their accountants.

Albom takes issue with the Obama administration’s position that “you’ve had it good long enough, “ and complains of Presidential Press Secretary Robert Gibb’s glib response to questions regarding the fairness of slapping an additional 5.4% surtax on wealthy Americans to pay for healthcare:

Quick to point out that he realizes health care must be reformed, Albom goes on to plead the case that piling it all on the backs of the rich is not the American way:

Whoa! Welcome to our world Mitch, baby. Where were you when Obama was running for president? Didn’t you hear him tell Joe the Plumber that he thinks “we have to spread the wealth around”? Did you not hear him repeatedly say we had to raise taxes – just not on the “average” American, who he kept identifying as anyone making less than $250,000. (That’s a lie as well, but a different post.) So who did Mitch think would be called on to shoulder the burden of this grand redistribution service? Who did he think would pay for Barry’s Transformation Nation?

Obama is perhaps the first politician in modern history to tell us exactly who he was, exactly what he was going to do and exactly how he intended to do it. That’s what you just have to love about liberals: you can show them the whole pig in the mud, and all they can see is bacon.