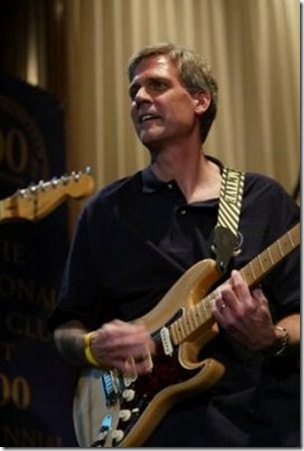 On the anniversary of Tony Snow’s death, Detroit would like to take a moment to remember him as an adopted son and someone we liked a lot. While he was not born here, he was raised in Cincinnati which gives him comparable blue-collar town chops. He worked as an editorial page deputy director at the Detroit News from 1984-87. Although his time in Detroit was limited, it was well spent. He found his soul mate and future wife, Jill, also working at the News.

Of the many eulogies offered at the time of his death, none summed up Tony Snow’s existence and perverse optimism as well as Bill Kristol's. Here’s an excerpt:

It is an exceptional man that is recalled so fondly.

I’ll confess to being drawn more to Camus and Orwell, but I did vicariously enjoy Tony’s optimistic and good humored view of the world. I also found it reassuring that even St. Tony could, on occasion, aim a cynical arrow in the direction of his opponents:

"Well, thank you for the Hezbollah view." –-White House Press Secretary Tony Snow to Helen Thomas, after the longtime White House reporter asked why the U.S. had vetoed an Arab-backed U.N. resolution

And just one last observation: While searching for Bill Kristol’s eulogy, I once again stumbled over the indescribable déclassé of the progressive leftists. Not satisfied with their “enemy’s” death, they had to wish him great pain and suffering as well. This, for a man who once apologized to David Gregory for pointing his finger at him. Wow. They better pray there’s no such thing as karma.