Remember the need for immediacy with the Stimulus Bill? Congress had to get it done by Valentine’s Day weekend? Maybe so Barry and Lady M could have something to celebrate on their Chicago “date weekend.” Anyway, they must have had a swell time because Barry didn’t get back to the White House until 4 days later to actually sign this crucial piece of legislation.

Apparently he knew that it didn’t really matter that much to the economy. As broadly speculated by just about everybody except the MSM at the time, the only real urgency was in preventing Congress from getting cold feet in light of the increasing barrage of objections from their constituents.  But the cult of crisis incites fools to action time and time again. And if there’s anything that Obama can do competently, it’s strike fear in the heart of all comers.

If any of the Congressional dufuses that passed the trillion dollar stimulus bill had taken the time to actually read it before voting they might have been a bit fearful of passing the largest spending bill in US history. Especially since it offered nothing that actually provided immediate economic stimulus, just a lot of good old fashioned pork.

Who am I kidding? They wouldn’t have been afraid, but their constituents might have been. Especially if the bill had been made “transparently” available on the internet 7 days before the vote – as promised by candidate Obama. And many would have given their elected representatives a very hard time about it, indeed. And Barry and Rahm-bo knew it.

So once again, word has come down from the Oval office that “health care in this country is a crisis.”  The President even got snippy with us. He apparently really doesn’t like people not doing what he says.  So tonight he’s going to give not just Congress, but all of us a good tongue lashing – explaining for the umpteenth time to  all of us government-mandate resistant morons why we need to pass the health care reform bill NOW.

But seriously, no. We don’t.  Apparently the Obama administration knows this too, since nothing in the bill as drafted goes into effect until 2010. So what’s the big rush to pass it now, Mr. President? Why is it so crucial that this be passed in the next two weeks, before Congress breaks for a summer vacation?

Yikes! Could it be because details of this disaster have been leaking out and the stooges that all voted for you are starting to squirm and ask questions like “Is it true there will be rationing of health care?” (Which is a polite way of saying services denied.)?

Because it’s hard to see how you avoid rationing if your own numbers are right. If there are currently 50 million uninsured people in this country not getting health care, how are you going to roll them into the pool with the same number of doctors and NOT need to ration services? Of course, your numbers are meaningless to begin with. Twenty million – or more –  of the 50 are illegal aliens. And anyone who’s had to go to an emergency room in the last 5 years knows that they are not going untreated, they’ve just taken it to the ER’s.

Also in the 50 million are any number of healthy young adults who don’t feel the need to have insurance because they’re immortal. They also are being treated when they get sick. Often in the ER too.

Then there are the poor, who don’t have insurance unless you count Medicaid as insurance. But they, too, are being treated. So in reality the only uninsured currently not being treated when they’re sick are probably old people too proud to ask for Medicaid, or go to the Emergency room when they can’t afford it. But don’t worry, they’re so old they’ll be denied treatment under Obama care anyway.

But you’ll still get rationing, because if you make medical care free to the “uninsured” (50 million by government estimates), of course demand will go up. If it’s free, every sniffle is an opportunity for a doctor’s visit and free drugs. And of course there will be a shortage of doctors. In the future, that shortage is likely to be even greater, as working for the government isn’t really what most people who spend 8 to 12 years in medical school want to do. And the quality of the docs will likely go down too. The best and the brightest will turn elsewhere in order to make a comfortable living.

And just one comment on the Prez’s assertion that “if you’re happy with your health care plan now, you can keep it.” I’m not buying it. And neither are any of my friends.  But it’s a great sales pitch. I look forward to hearing it again tonight.

And then there’s the issue of paying for this universal health care plan. Let’s start with the easy part: the plan is to cut out $950 billion over 10 years from government health care spending through such measures as lowering reimbursements to hospitals and doctors that treat Medicare patients.  Sorry, but that one doesn’t even pass the laugh test among Democratic supporters: 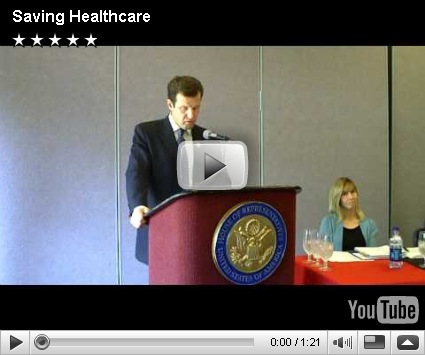 Of course beyond “government efficiencies”there will be higher taxes to cover the rest of the kazillion dollars we’ll need. Surely we can just get that from the rich? Well that, and we’ll tax your employer provided health care benefits – at least until your employer drops them and forces you into government care. Then, I guess we can just tax the rich some more. By then the “rich” will be anyone not drawing a government welfare check.

That might be just a couple of things Barry and Rahm-bo are worried about the Senators and Representatives hearing when they go home for summer vacation. That could be a real buzz-kill.

But, hey! Good luck with that prime time sales meeting or pep rally, or whatever it is tonight. Finally, we’ve found a (unworthy) replacement for Billy Mays. May he rest in peace. And may Obama Care soon join him.