America Asleep at the Switch

Goldman Sachs, America’s premier investment house, just announced 1Q profits of $3.6 billion. President Obama is set to throw another of his conniption fits at a speech on Wall Street later this week, no doubt vilifying Wall Street in general and Goldman in particular. They apparently weren’t listening back in 2009 when Obama said of the Wall Street investment houses: “There will be time for them to make profits, and there will be time for them to get bonuses -- now is not that time.” Got that Goldman? Now is not the time.

My question: what is wrong with making huge profits? Assuming they were made legally (but of course, we are now trained to believe that where there are huge profits, there is corruption. Thanks MSM, for doing your bit for capitalism.) There was a time when this would have been considered the American way to spread the wealth around. No longer. Obama would have you believe the government is the only one you can trust to do that: you make it, they take it. Since the masses are obviously in tax revolt mood, and with only 22% of the populace thinking that government is worth two cents – it’s clearly time to change the subject. Let’s go after Wall Street, the only target that can raise the ire of the people (again, thanks MSM and Hollywood) higher than taxes and government.

Not that I want to defend Goldman – they aren’t exactly squeaky clean – but still, that’s not why the Obama administration is vilifying them. They’re using them to sway public opinion (and therefore Congress’) against the corrupt titans of Wall Street and for the passage of the Financial Reform bill; to get government’s clutches firmly into the financial sector, via the latest self-inflicted crisis. Vilify Wall Street, get the financial controls bill – “to protect consumers and prevent a future bailout” – passed. Bad enough that it removes the responsibility from the Legislative Branch and gives it to an unelected (unaccountable) bureaucracy in the Administrative branch. Worse, it allows Obama to continue the country’s march towards socialism by giving yet more power over the economy to the government. Right out of the handbook. It you can't see it, it’s because you haven’t looked closely at what is happening right under our noses. Or you just don’t want to.

If we want to keep capitalism working in America, we have to let losers fail. There is no such thing as too big to fail. Of course, you also have to avoid idiotic legislation that promotes concepts such as “a house for everyone, whether you can afford it or not” based on principles of “social justice” - a concept that like much of communism is appealing on its face but unworkable. Next time, if banks and investment banks do stupid things, let them fail. It’s called consequences. Life doesn’t turn out very well, for either kids or companies, without them.

“Too big to fail” – an Epic Fail. By inserting the anything-but-invisible hand of government we’ve all but guaranteed a lengthier economic recovery, if not a generational recession. Which will of course make socialism even more attractive.

Would someone please wake the sleeping Lion. 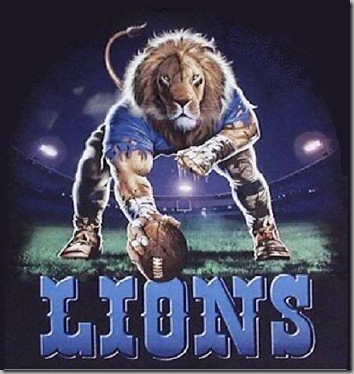 Posted by DEWEY FROM DETROIT at 11:11 AM