Politico’s Ben Smith – idiot – took a shot at our personal, and favorite, Congressman, Thaddeus McCotter, for a remark he made at the SRLC. Let me rephrase that, he libeled Congressman McCotter by claiming he made a racist comment, which by extension implied that the Congressman is a racist. Did I mention Ben Smith is an idiot?

First of all, McCotter is one of maybe a half-dozen incredibly decent pols in Washington. But since he’s a Republican that makes him an R-word -  which in this case stands for “racist.”  Second, the comment itself: "It's been a pleasure to be in your presence,  the Republicans of the South, who will help us all rise again," should speak for itself.  But Smith has to inject - what else - racism, claiming that this was code for the “south shall rise again,” in the context of the secession and slavery. Honestly, do these people eat sleep and breathe racism? And are they completely clueless of history? Quick recap: Republicans. Lincoln. Union. Anti-slavery. Democrats. South. Secession. Pro-slavery. So,  Mr. Smith, once again: just exactly what was your point?

Liberals. They should not be allowed to blog while practicing  their First Amendment rights.

This will be going into Thad’s Coolest Hits Archive. Judge for yourself: 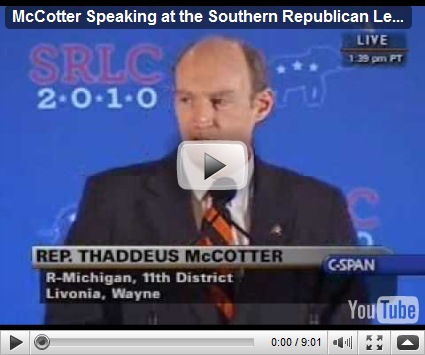 So OK, maybe his deadpan delivery won’t qualify his as the most eloquent speaker on the political circuit. But he is clean and articulate and unlike some eloquent speakers, he actually has something to say (and he gets extra points for not needing a teleprompter). Or as The Other McCain put it : “Thaddeus McCotter: because not all rhetoric has to be served in ALL CAPS with a shot of adrenaline.”

And he’s not a racist, Ben Smith. You racist idiot.

PS.  U.S. Representative Thaddeus G. McCotter, Chair of the Republican House Policy Committee, has written a  pamphlet, “We the People: Wide Awake for Our Newest Birth of Freedom,” in which he clearly and succinctly explains the challenges, duties, and principles the Republican Party currently faces. Available as PDF here .

We Are Wide Awake

They were “Wide Awakes” – Americans marching through sleepy hamlets for candidate Abraham Lincoln and the cause of human freedom. They were “Republicans!”

Today, Republicans continue to embrace our enduring duty to:

2. Conserve our cherished way of life and its foundations of faith, family, community and country;

And we act upon five permanent principles:

1. Our liberty is from God not the government;

2. Our sovereignty is in our souls not the soil;

3. Our security is from strength not surrender;

4. Our prosperity is from the private sector not the public sector; and

5. Our truths are self-evident not relative

Thad McCotter: one of the good guys. If you live in Michigan’s 11th district, be sure to get out the vote come November.

Posted by DEWEY FROM DETROIT at 1:08 PM