Ye Shall Know Me by the Friends I Keep

Preview of the caliber of nominees we might expect for the Supreme Court opening: Dawn Johnsen, President Obama’s nominee to head the Justice Department's Office of Legal Counsel. Ms Johnsen, a constitutional law professor at Indiana University and former head of the National Abortion Rights Action League (NARAL), once compared "forced pregnancy" with slavery. 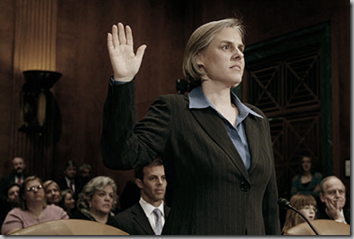 In a brief filed when she was a lawyer with the National Abortion Rights Action League, Johnsen cited a footnote that said forcing women to bear children was "disturbingly suggestive of involuntary servitude, prohibited by the 13th Amendment, in that forced pregnancy requires a woman to provide continuous physical service to the fetus in order to further the state's asserted interest."

This is what passes as nuanced philosophical thought amongst postmodern intelligentsia. (I wonder how they feel about other”involuntary servitude” “forced” by the “state’s asserted interests;” like working the first 99 days of the year to pay your federal income taxes? – so we can provide GloZell with her Obamacare.)

Republicans are threatening to filibuster the appointment, but they’ve been warned by NARAL president Nancy Keenan that “the use of the “F” word is unacceptable… and the threat will not go unanswered,” whatever that means. I sure hope they aren’t championing delayed-post-birth abortions  now.