Well, finally. A little common sense coming from Michigan’s Capital.  They stood in solidarity, demanding that the state’s legislative body cut spending instead of simply raising taxes yet again to deal with the deficit. Their position seems reasonable in a state that is losing population and business base at an alarming rate, and is well on it’s way to becoming California without the nice weather. 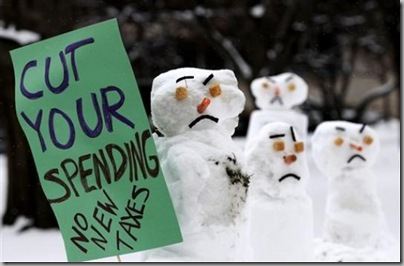 Unfortunately, it wasn’t anyone who actually worked IN the Capital that made this demand, but a bunch of snow goons that showed up to protest after a recent snow storm. Rumor has it that the group was  coordinated by a mid-Michigan group called Common Sense in Government that is affiliated with the Tea Party movement (ice tea in this case). 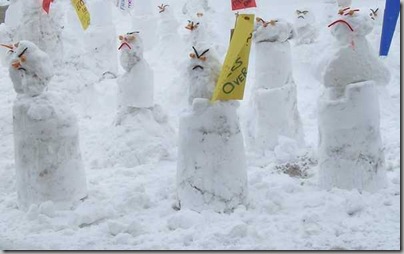 These Ice Tea Party goons are apparently mad as hell, and they have threatened to self immolate in protest when the sun comes out if their demands are not met.

H/T  to Terry and the blogprof, who has a lot more pictures of the insurgents under cover of night

Posted by DEWEY FROM DETROIT at 5:12 PM