Hell is Other People’s Fire 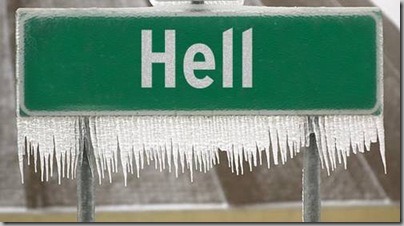 At the risk of boring you with the collapse of the Global Warming Alarmist Hoax, I must direct you to Mark Steyn’s latest, Traitors to the Cause. In his column yesterday, Change of Climate, Steyn chortled “that even the eco-lefties at the Guardian and the Independent, two of the most gung-ho warm-mongers on the planet, are beginning to entertain doubts,” and noted that Andrew Bolt has placed blame squarely in the media’s lap: “This example actually suggests how complicit the media has been in keeping the global warming scare alive by failing to report what was actually under its nose.”

Today he reports on the whiney rants of one Chris Wood from something called "the Canadian Journalism Project," who also thinks the media is at fault. Only he thinks the sell outs are  Steyn and others like him who deny the imminent danger of a global meltdown. Just because some of the data has been proved to be fraudulent, just because they manipulated data to “hide the decline” doesn’t mean we aren’t on fire, according to Wood. He accuses these media deniers of  "reckless endangerment" for proclaiming man-made global warming a scam and a hoax.

In a twist on the old legal saw, it is the equivalent of failing to shout fire in a crowded theater that is slowly filling with deadly fumes. . . You’re urging people to stay in their seats while the theatre burns.

Ah, these loons are amusing, no? Steyn swats them away like the gnats they are:

To take up your dreary analogy, we're staying in our seats enjoying the show while the environmental correspondents run for the exits shrieking ever more hysterically. If you want to flee in terror and roll around in the snow trying to put out imaginary flames, by all means take as long as you like, and then, when the fever passes, feel free to come back in dripping wet. But it's a bit of a stretch to call me a liar when you're the one insisting your pants are on fire.

Ricky Bobby Runs For the Exit:

If we’re going to worry about anyone’s chestnuts roasting, I suggest we focus on the underpants bomber’s. Those dudes constitute a clear and imminent threat.

Posted by DEWEY FROM DETROIT at 7:56 PM