My-partisanship: What Happens When the Won Get’s Miffed at Everyone 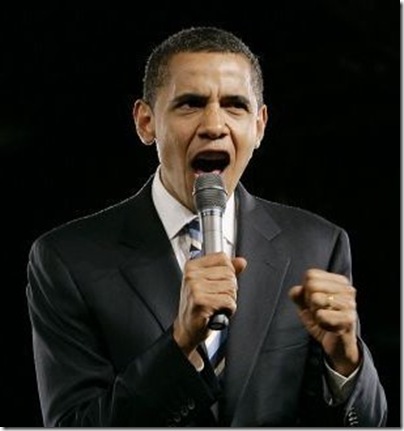 Don’t Make Me Come Down There!

Our nation’s great white hope for the first post-racial, post partisan administration has been strained to the point of collapse.

The post-racial mantle fell away swiftly, with the enactment of “The Professor and the Policeman” morality play last summer. From that point forward, any and all disagreements with Obama’s policies or tactics have been branded as racist by the Left; I guess because this incident confirmed for them the immutable truth that all white people are inherent racists acting stupidly. Or something.

Bi-partisanship was seriously wounded when Rahm announced that the fortuitous financial crisis would form the perfect platform from which to launch Obama’s full-out socialist plan.   Just as Alinsky had taught his acolytes, this was a crisis that they could not allow to go to waste. The Obama administration began a quite partisan plan of government intervention in everything that moved, and some that didn’t.

With a supermajority, there wasn’t even any thought of reaching across the aisle. As a result, the only bill that Republicans have embraced under Obama’s leadership has been the disgustingly fraudulent “Stimulus” Bill. And although the future tea partiers of America saw this bill for what it was at the time, and objected vociferously, our elected officials of both parties could only smell the irresistible aroma of roast pork. As the colorful Stimulus Mardi Gras float rumbled by, they lined the streets like children, yelling “Give me somethin’ mister!

But the “disenchanted” “angry mob” (racists) refused to get on with their lives and leave the politics to Washington. They continued to inundate their representatives with angry, no doubt rude, calls and emails. Democrats disconnected their phones and Republicans pulled the “Who, me? There’s nothing I can do about it” gambit as the public debt mounted and the jobless rate climbed.

The marginalized tea party movement got madder and madder, eventually rousing the Republicans from their stupor. But the Dems went about their merry way, seduced by the security of  their super-majority, and convinced the tea partiers were the rightwing nuts portrayed nightly on Ms.NBC. No Bipartisanship needed here.

But following New Jersey, Virginia and Massachusetts, even the arrogant Democrats have been snapped to by the sting of reality. After Scott Brown’s election, they couldn’t drop the hot national health care ‘tater fast enough.

But hold the phone baby – national health care is the Won’s  prime objective.  He will not let you go gentle into that good night. For that notch in his belt, he appears to be willing to squander anything he’s got left – including his house slaves.

So he pretended to play nice with the Republicans. Except his arrogance prevented him from pulling it off (inexperience extracts its price).

As Wesley Puden pointed out in the Washington Times,

“I also won't hesitate to condemn what I consider obstinacy."

"Bipartisanship cannot mean that Democrats give up everything they believe in ...

True. In Obama’s world, bipartisanship means Republicans give up everything they believe in, and do it his way.

The only way Republicans can demonstrate their lack of obstinacy, the president made clear, is to adopt the Democratic agenda and to tug a forelock and do it now.

So much for bipartisanship, but with the mood of the country being what it is right now,Obama may not even be able to pull this off with partisanship. Despite reports that Obama is going to write his own health care bill (that’s a good one), combining parts of the Senate and House bills  and ramming it through as a budget reconciliation bill requiring only a 51 vote majority, we’ll see if there are still 51 Democrats willing to give up their cushy Washington gig.

If not, if neither Bipartisanship or Partisanship work, the Won is still not done. No my friends, there is still My-partisanship, or Barry Knows Best. If he can’t ram his hand-hewn (so-to-speak) bill through Congress with his remaining loyal Demo-brats, he’ll take matters into his own hands. He is the WON you know: he has executive powers.  As reported last week in the NYT:

With much of his legislative agenda stalled in Congress, President Obama and his team are preparing an array of actions using his executive power to advance energy, environmental, fiscal and other domestic policy priorities.

And he’s not afraid to declare the health care crisis and global cooling warming to be issues of national security if need be, to execute his own clear headed My-partisan, Chicago–style solutions:

Mr. Obama has already decided to create a bipartisan budget commission under his own authority after Congress refused to do so.

And the Environmental Protection Agency is moving  forward with possible regulations on heat-trapping gases blamed for climate change, while a bill to cap such emissions languishes in the Senate.

Oh, and did I mention recess appointments? The Won’s miffed at the audacity of the dopes in Congress who are holding up his carefully selected prime specimens for key jobs, so. . .

“If the stalling tactics continue,” said Robert Gibbs, the White House press secretary, “he’s not ruling out using recess appointments for anybody that he’s nominated.”

Yes, it all sounds a bit heavy-handed, a bit tyrannical. A bit like he thinks he might be king.

Posted by DEWEY FROM DETROIT at 1:53 PM