It’s Not As Easy As It Looks

Woe, Canada!  Seven years in the planning, and still there have been snafus galore at the Vancouver Winter Olympics. According to the Seattle Times, the Olympic Committee has had to cancel 28,000 tickets to events at Cypress Mountain as the rain has melted the snow in the standing room observation area, leaving huge gaps in the straw bales beneath that people were falling into. The Vancouver Olympic Committee held  a briefing on Tuesday "touching on everything from transportation snafus to equipment failures to weather woes to the prison-camp look of the Olympic caldron display.”  Reporters were asking if  “this might be the worst start ever to an Olympic Games.”

In addition to the problem with the straw bales, one of four pillars supporting the Olympic cauldron to be lit at the Opening Night Ceremonies refused to open, making for some awkward television before they decided to proceed with the remaining 3 pillars. Transportation problems have hounded the venues, with busses getting ticket holders to events late, or not at all, due to the drivers getting lost and busses breaking down. And at the speed skating oval, delays of over an hour were endured when the Zamboni broke and couldn’t resurface the ice properly.  Concessions at venues are woefully undersized, which is a problem since spectators are not allowed to bring food or beverages with them. And while no one can do anything about the weather (or the climate, for that matter), it doesn’t seem as though event organizers did adequate contingency planning in the case of having to reschedule events due to predictably bad weather.

It’s really not as easy as it looks, is it?

Take the Salt Lake Winter Games in 2002 for example. Everything there went without a hitch.

It was not just luck. In fact, there were some very heavy odds betting against it. In 1999 the Salt Lake Olympic Committee was embroiled in charges of bribery and corruption. The Committee’s Chairman and President were both forced to resign. Mitt Romney was drafted to step in and attempt to salvage the games, and the United States reputation. When he took over in February of 1999, the budget was already deeply in the red, sponsors were all but non-existent because of the bribery allegations and staff morale couldn’t have gotten any lower unless you flushed.

The previous regime had already spent 3 years and a ton of money to become so engulfed in muck and debt. With less than 3 years to pull it together, Romney revamped everything from leadership (key in any endeavor) to policies. He reduced budgets and set about lining up private funding. By organizing 23,000 volunteers and providing leadership and oversight to the enterprise, Romney managed to pull off what many considered to be impossible: the Salt Lake Games came off without barely a hitch. And this, despite an unanticipated need to implement new, previously unheard of security measures  following the 9/11 terrorist attack just months before the start of the Olympics. The extra security required an additional $350 million  - nearly all of which was raised privately. As in “not government.”

You may not recall, but the 2002 Winter Olympic Games began in fear and trepidation because of the new age of terror. But they were a triumph of logistics, efficiencies, non-intrusive security and remarkable athleticism. They provided a needed shot in the arm of patriotic pride following the grim business of the previous September.

And the games ran like clockwork, the venues queued and cleared with remarkable proficiency. Transportation was plentiful, and managed to get spectators to and from the events on time. Traffic was effectively directed and managed at every venue, at every event. Lodging facilities were adequate for the crowds, as were the concessions and the all important porta-johns. And I report this as an on-the-ground observer. Despite crowds larger than the normal Sundance crowd by an order of magnitude, and unprecedented security, Park City was easier to get around in during the Olympics than during the annual film festival. By all accounts, athletes, spectators and even journalists were pleased with the way the games went. 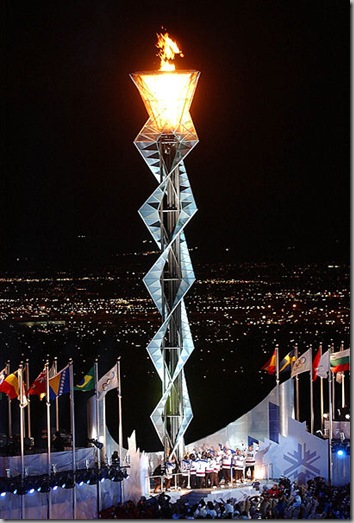 And to cap it all off: the Salt Lake Olympic Organizing Committee actually made money: $100 million. An Olympian achievement, since most Winter Games loose money. Granted, Mitt Romney had an unfair advantage: he was a business man. He served as CEO of Bain & Company, a management consulting firm, and co-founder of Bain Capital, a private equity investment firm. It was probably that background that enabled  him to salvage a win from a seemingly hopeless morass of incompetency and corruption, and make us proud to be Americans following that horrible September.

I’d like to see our community organizer in chief pull that off.

You might  want to keep this story in mind when you contemplate who should serve in the Office of the Presidency next time around. I’m not advocating for anyone in particular, I’m just asking you to consider what kind of man – or woman – you would feel more comfortable with:

A man who would have you feel proud… 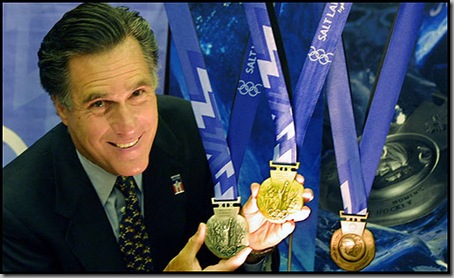 Or a man who would have you feel shame… 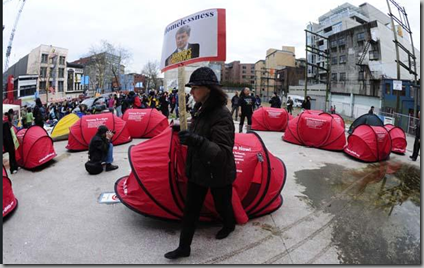 Protestors at Tent City — an improvised community set up, in street guerrilla fashion, on a developer’s lot in the downtrodden Eastside section of Vancouver – to protest on behalf of Vancouver’s homeless during the Olympic games. Nice Tents!

Posted by DEWEY FROM DETROIT at 1:21 AM