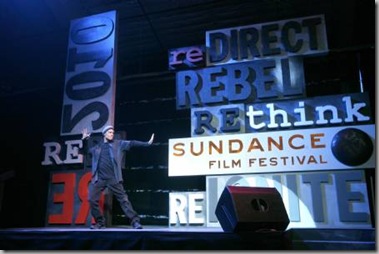 Sundance wrapped up last night as any respectable undertaking involving actors would: with an awards show. As is usually the case, the winners included the requisite anti-war (Restropo), anti-capitalism (Waste Land and Gasland– NOT The Shock Doctrine! That was a shock.) and dark-side-of-humanity (Winter’s Bone and Animal Kingdom) films. And of course there was the standard mindless semi-comedy feel good movie (happythankyoumoreplease).

The only surprise was that the audience choice award went to Waiting for Superman, a documentary which takes a tough look at the role teachers' unions have played in the devastation of America's urban schools. It was dubbed the “An Inconvenient Truth” for Republicans (directed by Davis Guggenheim who also did Algore’s Oscar winning film filled, inconveniently, with lies. Otherwise no connection to the Nobel Laureate’s opus.)

Also as usual, none of the films buzzed about before the festival (The Romantics, Meet the Riley’s, Blue Valentine, The Runaways) made much of hit beyond their initial thud. This year the crowds were way down, the swag was way, way down, and film sales to distributors were nearly non-existent. Could the latter be due to a tight credit market, and distributors not being willing to put up millions for risky films that the public might dislike intensely?

Robert Redford has described this year’s festival  as taking a turn to “get back to it’s roots.”  The Festival Guide, as well as every screening, begins with the exhortation: “This is the renewed rebellion. This is the recharged fight against the establishment of the expected. This is the rebirth of the battle for brave new ideas.” I felt like a sophomore in college again. Nothing feels quite as irrelevant at my age as that.

Redford would have you believe that this new course is by choice and design, not because of the recession which already smacked last year’s festival upside the head. This year a lot of the studio specialty houses have simply disappeared. They were the distributors for the little, off-beat films that used to get bid up here like IPO’s before the credit markets evaporated in the wake of the great fiscal meltdown. But this year, Redford tells us, it’s all about the art again. That’s pretty much what you’re left with when there’s no money in the system.

Now I like art as much as the next guy, even fancy myself to be an artist of sorts. But the film makers that come here are all hoping to make a living off their art. But  guess what? Without the greedy capitalists, that’s damn hard to do. So my advice – not that anyone’s asked for it – is to make better movies that people will be willing to pay to see. If you can’t do that without sacrificing “your art” you’re either in the wrong business or you aren’t any good at it. Find another livelihood.

I did see three decent movies at Sundance, which has got to be a record. One I already reviewed Please Give. The Company Men, another flick highly touted before hand, stars Tommy Lee Jones and Ben Affleck in what must be the newest genre: the layoff movie. Who can’t relate to that? The best of show in my opinion was Get Low, a minor mystery story about an old hermit living in the Tennessee woods in the 1930’s. 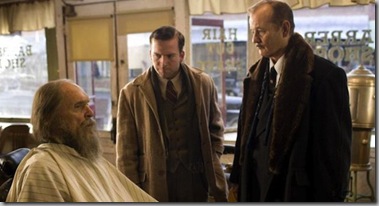 It stars Robert Duvall and Bill Murray: either one would be worth the price of admission alone. None of these three have been bought for distribution yet, but I’m betting they will. You could do much worse.

On another note, and just to keep you grounded in reality, I’m reposting  from Ace of Spades a piece in full,  just because it’s so good. Enjoy.

I didn't deal with this because all I have to say is so friggin' obvious it pains me to say it. I don't like boring you with the obvious.

It's not that Chris Matthews is a racist per se. It's that he's never viewed Obama as anything but black, and therefore not as a human being, nor as a politician, but as a Symbol (capital S intended).

There is a tradition in film, as Spike Lee and, frankly, I, have pointed out. The tradition of the Magical Negro.

The Numinous Negro is not really a character. He's not really a person, not even in the fictive world of the film. He is simply a walking Symbol of hopes about racial conciliation, or black achievement, or, especially, redemption for White Sin.

When Jack Walsh gives Jonathan "The Duke" Mardukis his watch at the end of Midnight Run, of course, he's not just giving him a watch. The watch is triple symbol for more important matters. (I won't bore you listing them -- if you've seen the film, you know what they are. If you haven't, this is irrelevant.)

To Chris Matthews, Barack Obama has never been anything but that symbolic watch passed from a white guy to a black guy, nothing but a token indicating a Redemptive Act.

And the problem is, of course, Barack Obama is not that, and never was that. He is a human being, with all the usual flaws -- and some very unusual and dangerous ones -- and furthermore he was not being elected to the office of Symbol in Chief of the United States of America, but to a position where he'd have to do things beyond merely Signifying.

Oh, he's awesome as a Signifier. One can say he is the best Signifier of any politician we've ever elected.

So -- for one hour, for precisely one hour, Chris Matthews finally forgot Obama was black, finally forgot he wasn't just a Numinous Negro, not just a Symbol, not just a Signifier, not just a walking breathing Metaphor for the Closure of (Also Metaphorical) Racial Wounds From the Bull Connor days, and realized -- Shit, this guy is President, he does things besides serve as quasi-literary plot device for redeeming my own racial sins and the racial sins of my father and grandfathers.

I'd like to go on record as noting that 99% of conservatives saw him this way -- as a person, as a candidate, and then as a president -- for, like, ever.

So good on you, Chris Matthews. After two years, and for one single hour, you actually managed to evolve past Numinous Negroes and Symbols into appreciating that Barack Obama is a human being and currently holding the most important office in the world.

After two years, and for one single hour, you managed to become every bit as advanced in your thinking and enlightened as any conservative you might bump into in the street.

Posted by DEWEY FROM DETROIT at 9:57 PM