The Shock Doctrine, a movie based on Naomi Klein’s book by the same name, premiered at Sundance last Thursday evening.

In case you didn’t avail yourself of Klein’s book, here’s all you  need to know about it; lifelong Stalinist and propagandist Howard Zinn (may he rest in his godless peace) said of it: "This is a brilliant book, one of the most important I have read in a long time." 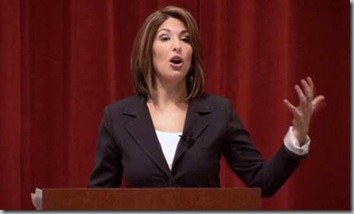 Naomi Klein, against an appropriate backdrop

Let me establish the book and film’s basic premise: evil capitalists around the world have used disasters – both natural and man-made – to enrich themselves with absolutely no thought or concern for the suffering victims of the catastrophes.  If you think I’m exaggerating, I would direct you to the synopsis in the official Sundance Film Festival catalog (along with my annotations):

Based on the best-selling book by Naomi Klein, The Shock Doctrine seeks to explain the rise of disaster capitalism (as if this is an accepted premise): the exploitation of moments of crisis in vulnerable countries by governments and big business. The film traces the doctrine’s beginnings in the radical theories of Milton Friedman (radical? By who’s standards? Some of us don’t consider free market capitalism radical.) at the University of Chicago, and its subsequent implementation over the past 40 years in countries as disparate as Augusto Pinochet’s Chile, Boris Yeltsin’s Russia, Margaret Thatcher’s Great Britain, and most recently through the invasions of Afghanistan and Iraq.
Filmmakers Michael Winterbottom and Mat Whitecross use a brand of artistic license (I would like to see a definition of “a brand of artistic license.”  Exaggeration?Lying by proxy?) to present a cinematic experience that takes this theory (Oh. So maybe the “rise of disaster capitalism” is just a theory?) to a new audience (the gullible and not-yet-indoctrinated  amongst us). They make heavy use of archival images, offset with new footage of Klein's interviews and lectures (there’s some concrete research for you. Maybe she has opinions on global warming too.). Warning: After viewing this film, you may interpret our world history in a new light (I’m sure you will: through the prism of an anti-capitalist who has made her fortune by running the system that she’s benefitted from into the ground. Get out of the way Michael Moore, Algore: we have a new goddess.)

Here’s a squib from the Salt Lake Tribune about Bobby Redford’s take on Naomi’s contribution to this year’s “I Hate America” Festival (again with my annotations):

Redford complimented Klein for her ability to trace the recurring pattern of crisis and opportunism back to its source: The late economist Milton Friedman ( While I’m sure Friedman would be flattered, I think he’d decline to take credit for the human condition.), a strident opponent of Franklin Roosevelt's New Deal who believed in unrestrained free markets and little or no government involvement in the economy. (Oh! So that’s what you meant by “radical”!)

"I don't think I had seen anything with that long a thread," Redford said of Klein's book."  (Wow! All the way back to the 1940’s! Maybe other chroniclers of 21st century problems should give that approach a try. Like, how about pursuing the roots of Islamic fascism back to its origins. That would be – when?- about the time George W. Bush took office?) "We don't have enough interest in history to learn from our mistakes." (Speak for yourself, dude.). . .

Often, Klein and the filmmakers argue, (but don’t prove) the results have been a wider gap between rich and poor, imprisonment of political enemies,(ah - that’s actually most often the work of tyrannical leaders, not greedy capitalists. And in case you missed this in history class, most tyrannical leaders are either fascists, communists or socialists.) and abuses of human rights (ditto).

The pattern played out again, Klein told the Eccles audience, in Haiti in the aftermath of this month's earthquake (some might argue that it’s a little too early to make that call.). Within 24 hours after the quake, Klein said, the conservative Heritage Foundation had issued a statement touting "an opportunity to remake Haiti's economy." The notice on the foundation's Web site was removed within a day, Klein said, because of the public outcry.

Here is the part that Klein and the left found so egregious:

“In addition to providing immediate humanitarian assistance, the U.S. response to the tragic earthquake in Haiti earthquake offers opportunities to re-shape Haiti’s long-dysfunctional government and economy as well as to improve the public image of the United States in the region.”

Is it just me? I don’t really find that to be so offensive. The Heritage Foundation isn’t a disaster aid organization. Perhaps the timing was a bit insensitive, but in this world some people are emergency responders, and others are busy running the grid and making sure there will still be power to run things in the morning. The fact is the government of Haiti has been dysfunctional for over 200 years. An earthquake of a magnitude of 7.1 - approximately the same magnitude  as Haiti’s – hit San Francisco in 1989, killing 63. Haiti’s death toll so far stands at 150,000 with estimates it could double. Why not use this opportunity to notice that  two centuries of poverty and political corruption created this morass, and, yes, crass as it may seem to bleeding hearts, democracy and free market capitalism is the best way out. Sorry if that seems a little too left brained for the situation, but what kind of an idiot would assume that such an observation is only about making money? Willing people the means to build a better life for themselves doesn’t strike me as crass.

But I digress. Back to Ms. Klein’s objection to the Heritage Foundation’s observation that the tragedy could provide opportunities to reshape Haiti’s fate.

Let’s see, that would be wrong because… oh yes, Naomi’s book/movie’s basic premise is:

… crises are often used now as the pretext for pushing through policies that you cannot push through under times of stability. Countries in periods of extreme crisis are desperate for any kind of aid, any kind of money, and are not in a position to negotiate fairly the terms of that exchange.

And we all know that the progressive left would never pursue such opportunistic means. Well, except for Saul Alinsky whose entire book, Rules For Radicals, is premised on just that. Oh, and Rahm (“never let a good crisis go to waste”) Emanuel and David Axelrod, who designed Obama’s year one legislative agenda around just that principle.

Were I more cynical – well, to be honest, I probably couldn’t be - so let me just say this: others might accuse Naomi herself of taking advantage of the Haiti situation to further hype her polemic against Milton Friedman’s brand of capitalism. It couldn’t have happened at a more opportune time: The Sundance premiere of her movie by the same name as her best selling book - soon to be re-released in paperback. But I wouldn’t, personally, accuse her of anything so crass.

But by all means, see the movie. You have probably never seen anyone chronicle decades of natural disasters and political upheavals and coups as nothing more than a food source for blood-sucking capitalists. Their sole purpose is to make money off the backs of impoverished victims: inflicting depression and mass poverty where none previously existed. Klein likens the free-market “shock therapies”  to “electroshock torture.” She has placed the privatization of New Orleans’s public schools after Katrina on the same level as the corrupt sale of Russian’s state economy to oligarchs following the collapse of the Soviet Union. No hyperbole there.

Good grief. An 82 minute documentary dedicated to the premise that capitalism exploits tragedy. I wonder how much they think they can sell it for?

Yack. I can’t seem to get this hairball out of my throat.

I give it a solid B+