Attack of the Snow Goons II

Here is perhaps all you really need to know:

A WARNING that climate change will melt most of the Himalayan glaciers by 2035 is likely to be retracted after a series of scientific blunders by the United Nations body that issued it. 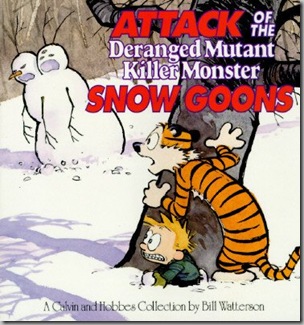 But why stop at the mere essential, when there are so many more tantalizing embellishments? Like this:

Two years ago the Intergovernmental Panel on Climate Change (IPCC) issued a benchmark report that was claimed to incorporate the latest and most detailed research into the impact of global warming. A central claim was the world's glaciers were melting so fast that those in the Himalayas could vanish by 2035.

In the past few days the scientists behind the warning have admitted that it was based on a news story in the New Scientist, a popular science journal, published eight years before the IPCC's 2007 report.

It has also emerged that the New Scientist report was itself based on a short telephone interview with Syed Hasnain, a little-known Indian scientist then based at Jawaharlal Nehru University in Delhi.

Hasnain has since admitted that the claim was "speculation" and was not supported by any formal research. If confirmed it would be one of the most serious failures yet seen in climate research. The IPCC was set up precisely to ensure that world leaders had the best possible scientific advice on climate change.

So much for the vaunted “peer review” process that global warmists have worn like a shield of infallibility.

But of course it’s not just the AGW idiots that “cook the books.” Politicians and scientists – of late – are neck and neck for contortionist tricks called “lying” in the vernacular.

Michael J. Boskin has a piece in the WSJ that sums up this debilitating tendency:

Politicians and scientists who don't like what their data show lately have simply taken to changing the numbers. They believe that their end—socialism, global climate regulation, health-care legislation, repudiating debt commitments, la gloire française—justifies throwing out even minimum standards of accuracy. It appears that no numbers are immune: not GDP, not inflation, not budget, not job or cost estimates, and certainly not temperature.

He details a few of the more outrageous lies told by France, Venezuela and Argentina before bringing it home to explain why the Obama administration’s “jobs created or saved” tagline has degenerated into such a farce that it was ultimately scrapped last week. Boskin notes how rabid environmentalists “have descended into a separate reality” claiming economic advantage where none exists; and he recaps how the liars at East Anglia University –supposedly scientists adhering to the most exacting standards – manipulated data to hide the decline of the earth’s temperature over time. (An aside: this type of chicanery is not only unethical, it’s immoral. Suppose the planet is actually moving into a mini-ice age, and the lies of these clowns serve to ensure that maximum resources are allocated to preparing for an earth on fire.)

Moving to domestic policies, Professor Boskin presents more ludicrous Administration claims, including the application of a dubious “Keynesian” multiplier of 1.5 to all governmental spending. This  creates a theoretical universe where every dollar spent represents an additional $1.50 in additional income, presumably to the unemployed. This claim causes real economists to laugh or cry, either of which tell you how valid the assumption is. Or if you’re still not convinced, see how well that theory has worked out for Argentina.

But by far, the most egregious domestic lie rolled out to-date has got to be the healthcare lie:

Even more blatant is the numbers game being used to justify health-insurance reform legislation, which claims to greatly expand coverage, decrease health-insurance costs, and reduce the deficit. That magic flows easily from counting 10 years of dubious Medicare "savings" and tax hikes, but only six years of spending; assuming large cuts in doctor reimbursements that later will be cancelled; and making the states (other than Sen. Ben Nelson's Nebraska) pay a big share of the cost by expanding Medicaid eligibility. The Medicare "savings" and payroll tax hikes are counted twice—first to help pay for expanded coverage, and then to claim to extend the life of Medicare.

Boskin contends the good news is that people are just not buying this crap any more. The polling on these issues tend to support him. Perhaps we’ll see tomorrow when Massachusetts voters turn out to vote in their senatorial race that’s said to be a referendum on Obamanomics.

Chose wisely, weed hoppers. The state of the Republic may depend on it.

Posted by DEWEY FROM DETROIT at 2:44 PM