The PIBS are back! 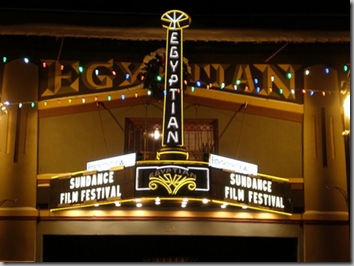 For those readers who are not friends of, or related to Team Dewey (and all 12 of you know who you are), I should probably tell  you that we have two habitats for our humanity. One is 15 minutes from the rarefied air of Ann Arbor, the enclave of the most uber-liberal intelligentsia in all of Michigan. The other is in Park City, UT – the only enclave of liberalism in Utah, and the air is rarefied only by a lack of oxygen. We enjoy living among the enemy; it keeps us on our toes.

If any one feels that having two homes in these trying times smacks of wretched excess, all I can say is “do you know anyone who would like to buy a house in Northville, Michigan?” No? Neither do we.

Anyway, we’re in Park City for the ski season, and we’ve had 28 inches of snow in the last 2 days, so that’s good. But every January for 10 days our little mountain town is invaded by celluloid junkies for the Sundance Film Festival. Descending en masse are actors of both sex, directors, producers, agents, distributors and all manner of other filmdom creatures: buffs, groupies, enablers and wannabes. All but the celebrities are known collectively as “PIBS” – people in black. We’ve been here for 10 Sundance seasons, and the sartorial statement of head to toe black garb is apparently the only look that never goes out of style. Which is great for years like this when we have a lot of fresh snow - it makes them easier to hit.

It’s always fun when the weather co-operates and a heavy snowfall coincides with the arrival of the Sundancers. The vast majority come from either southern California - where they can’t even walk in snow, let alone drive – or New York, where they do know how to walk in snow, but - since nobody there owns a car – they certainly don’t know how to drive, even on dry pavement. Somehow they figure it will be easier to drive in the mountains, with  ice and snow, so they all rent cars. Which of course results in 10 days of incessant horn blowing and bumper car games.

But getting back to fashion: this is a creative crowd, so accessorizing their black garb is a competitive sport. Scarves are big – really big. Most could double as a picnic spread. Hats are also favored, as long as they don’t muss the hair or provide any meaningful shelter from the weather. Gloves without fingertips are big, to accomodate emergency iPhone and Blackberry texting.  Also, for reasons unfathomable to anyone who actually lives here, the ‘dancers think that 6 inch stiletto heels (worn mostly, although not exclusively, by women) constitute appropriate footwear for January in the mountains. Perhaps they figure a good set of ice picks will come in handy, although rappelling off roofs and tall snow piles is frowned upon by the local gendarmes. 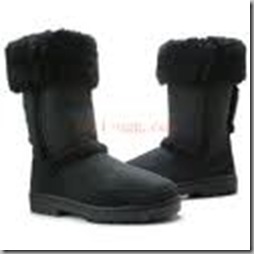 Uggs are acceptable foot attire if the temps dip below zero. But only if they’re black.

The opposite extreme in foot attire are the ubiquitous flip flops worn by male and female alike. Like black costumes, they never seem to go out of style. It’s only day one of Sundance 2010, and I’ve already seen the first pair early this morning at the local grocery store. A lovely young thing was cruising the organic oranges, apples and pears display in a full length stretch acrylic one piece dress (black, of course) over which she had pulled a fleece zip up hoodie (also black), unzipped (otherwise, we wouldn’t have been able to enjoy her cleavage, which she no doubt paid good money for). On her perfectly manicured toes, a pair of light tan flip flops adorned with a big daisy. Having just come in from the slush filled parking lot, I suggested that she might want to pick up a roll of paper towels to go with her fruit and nuts (organic almonds). Otherwise I know what’s going to happen, she’ll be texting everybody she knows to tell them how cold and miserable it is in Park City.

Ah! To be in Park City when the PIBS whine.

Stay tuned. There may be movie reviews. 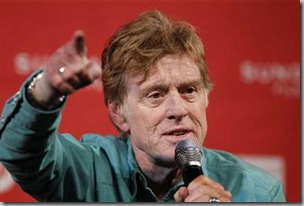 Robert Redford at the opening session of Sundance 2010. The reason LA has the highest number of cosmetic surgeons per capita of any where on earth.

Posted by DEWEY FROM DETROIT at 12:10 AM