NOTE: This report has been filed by your reporter who  infiltrated the Church of Obamatology  services located inside a Chicago Acorn Community Center.

Scientology is so last decade. The decade of the ‘10’s offers a newer, better, historic religion to those looking for a higher power than themselves: Obamatology. This post-racial, post-partisan religion of peace-at-any-cost accepts Obama as their messiah and savior. 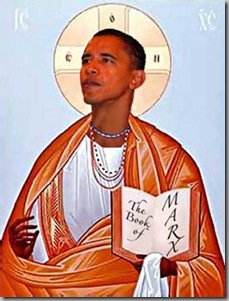 It’s the theological codification of Chicago rules. It calls for the complete destruction of your enemies, also known as infidels or conservatives.  It blesses and condones a holy war against pre-Obama American values. Known as the “Ohad,”  this holy war recruits warriors from the rank and file (known as Ohadists). Rahm Emanuel is the religious sect’s  highest holy man and (known as the Oman) supreme commander of the Ohad. As such, he decrees who the enemies of Obamatology are who must be smote.

So far, enemies on the Ohadists include DougRoss@Journal’s new main stream media bloggers, FOX news, all Republicans, Libertarians, Tea Partiers, and all non-Democratic voting Americans outside the Beltway, New York and Los Angeles.

This is not a complete list, but to-date what your  undercover reporter has ascertained of the doctrine of the religion is as follows;

Ohadists are required  praise Obama at all times

They must disrupt and destroy the American  economy in order to make way for the more robust economy founded on social justice.

They are required to commit political and/or career suicide, if need be, in the process of following the above dictums.

To date, known and suspected Ohadist’s include:

All MSM reporters and talking heads with the exception of Jake Tapper. Recent press briefings have brought  Chip Reed’s allegiance into question as well.

All Democratic Senators and Congressman, with special blessings conferred upon Claire McCaskill, Ben Nelson and Mary Landrieu: Although it isn’t clear that they were told they were armed with career-ending explosives when they negotiated their votes.

So committed to Obamatology  is this lot, that they’ve even enlisted their leadership to commit career suicide. Harry Reid is a given, and we assume Nancy Pelosi has chosen to do so as well, although from the frozen look on her face for the past 6 months, it’s possible she already has.

Listed below are some recent examples of Ohadist suicide activities (so you know what to watch for):

Two days after a Muslim  on our terrorist watch list boards a Detroit bound jet with a panty load without a passport, on a one-way ticket after his own father turned him in to the American Embassy- the Secretary of Homeland Security goes on the Sunday shoes to claim “ the system worked”. Ouch! That must have hurt, Bruno.

After negotiating the health care bill behind closed doors, cutting deals in previously smoke filled rooms and refusing to post the bill online 72 hours before the Christmas Eve vote, Nancy Pelosi goes on record as saying “ there’s never been a more transparent process”.

Stay tuned for updates on Obamatology and it’s historic efforts to become America’s first ever state religion. Also, we will continue to issue regular Ohadist updates and reports on the progress of this dangerous sect.  Of course, if they continue  to commit suicide at the current rate, this could prove to be a less deadly religion that originally suspected. Sort of like swine flu.

Posted by DEWEY FROM DETROIT at 1:05 PM