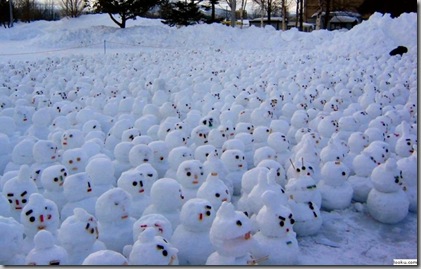 As corporate and political honchos are fond of saying: “lead, follow, or get out of the way.” Of course, the type of people who say that sort of thing, really mean “follow”. Apparently the same is true in academia.

But as the skin continues to be peeled back from the so-called global warming “research”, it becoming more difficult for anyone other than the truly weak-willed and weak-minded to trot along behind. Especially since the snow gods continue to rain down an avalanche of ice and snow.

As Patrick J. Michaels points out in his WSJ op-ed,

Few people understand the real significance of Climategate, the now-famous hacking of emails from the University of East Anglia Climatic Research Unit (CRU). Most see the contents as demonstrating some arbitrary manipulating of various climate data sources in order to fit preconceived hypotheses (true), or as stonewalling and requesting colleagues to destroy emails to the United Nations Intergovernmental Panel on Climate Change (IPCC) in the face of potential or actual Freedom of Information requests (also true).

But there's something much, much worse going on—a silencing of climate scientists, akin to filtering what goes in the bible, that will have consequences for public policy, including the Environmental Protection Agency's (EPA) recent categorization of carbon dioxide as a "pollutant."

The “bible” he refers to is the refereed scientific literature, which is the canon of climate science, assumed to be a true and unbiased sample of the state of climate science. He goes on to explain how studies conducted by principled, reputable scientists concluded that “20th-century temperatures could not confidently be considered to be warmer than those indicated at the beginning of the last millennium” (also known as the Medieval Warm Period). Since this conclusion conflicted with Michael Mann’s famous 1999 “hockey stick” article in Geophysical Research Letters,  which:

… through the magic of multivariate statistics and questionable data weighting, wiped out both the Medieval Warm Period and the subsequent "Little Ice Age" (a cold period from the late 16th century to the mid-19th century), leaving only the 20th-century warming as an anomaly of note.

As many people now know, Mann was forced to retract his infamous, fake hockey stick graph that made Al Gore an Academy Award and Nobel Peace Prize winner. But he was plenty ticked off about it, and tried to stifle scientists who continued to attempt to publish conflicting data.

Mr. Mann called upon his colleagues to try and put Climate Research out of business. "Perhaps we should encourage our colleagues in the climate research community to no longer submit to, or cite papers in, this journal," he wrote in one of the emails. "We would also need to consider what we tell or request of our more reasonable colleagues who currently sit on the editorial board."

After Messrs. Jones and Mann threatened a boycott of publications and reviews, half the editorial board of Climate Research resigned. People who didn't toe Messrs. Wigley, Mann and Jones's line began to experience increasing difficulty in publishing their results.

In what alternative universe would a professor who conducted and published research that is either so incompetently inaccurate, or so sinisterly misrepresented as to constitute fraud, not be drummed out of his profession? Apparently ours, since when Professor Mann’s “mistake” was uncovered, he continued to reign as one of the leading gurus in the field of global warming. How do you explain such a thing?

It’s easier to understand when you realize we are dealing with religion rather than science. Professor Mann had been appointed (bought?) as a high priest of the religion of AGW by the church elders, and his research was deemed to be not only infallible, but invaluable.

The church of Anthropogenic Global Warming is comprised of two camps. First, the true believers who think the earth has a fever caused by mankind’s original sin: but for man, everything on planet earth would be perfect. No earthquakes, no hurricanes, no volcanoes, no species would ever go extinct, no icecaps would melt and life would be in perfect stasis (i.e. dying, but let’s not get into that). I exaggerate of course, but by and large, true believers expect stability and gradual, if any, change. Never mind that this is not the history of the world. Catastrophic events have happened since life began –and will continue. We are powerless in their face: ice ages, warming periods, meteors, volcanoes: I defy Al Gore to stop them. They really aren’t caused by cars and cow farts. Most of the true believers can be characterized by Hollywood liberal-types and other easily brainwashed life forms - like most people coming out of universities in the past 25 years.

Then there is the other element of this new-age religion. The shysters like Al Gore and George Soros who fraudulently misrepresent facts in order to establish themselves firmly in the middle of the largest transfer of money in the history of the world. In this simplest, and stupidest, of schemes known by many names but most recently as “cash and trade”, the wealthiest of nations, through the extortion of taxes from their citizens , are require to give money to the poorest of nations.  Presumably so they can remain that way, since these are the very nations that have proved themselves time and again guilty of corruption in the use such funds. Oil for Food always comes to mind, in which a handful of people got rich and the people continued to starve. As always, the global Sopranos at the UN get “their taste”.

But the fraudsters prey on the vulnerability of the true-believers – who they find much easier to manipulate when they remain in a perpetual state of fear. The frauds are the high priests who will channel what the angry gods demand by way of appeasement from us flawed mortals. Since they are smarter and more in tune with Gaia than the rest of us, we can leave it to them to determine who the sacrificial virgins will be. And if they tell us we have to stop driving our gasoline guzzlers, stop using incandescent light bulbs, stop using coal and gas, build green windmills, green batteries, eat green organic food, buy carbon credits for our carbon sins, and give a bunch of money to the undeveloped world so they can remain undeveloped, well –who could question their wisdom? What are a few virgins in exchange for a lifetime of Arctic icecaps?

We better stop worrying about how to live without exhaling carbon dioxide and start focusing on how to adapt to unknown and unexpected changes to planet earth. Because an ice age would present much greater challenges than another warm period. And if we dodge both of those sun-tossed bullets, Mahmoud Ahmadinejad may have plans that require adaptation too.

Posted by DEWEY FROM DETROIT at 6:10 PM