Except  when it’s really about a choice between liberty and tyranny. 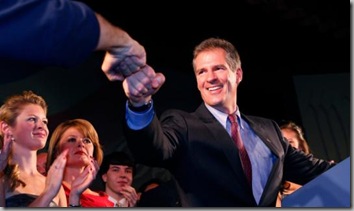 Geeze, how did this guy win?

Enjoy your morning schadenfreud, you earned it. Here’s but a small sampling of reaction to Scott Brown’s “surprise” win in Massachusetts yesterday.

Headline of the Year, from Pundette:

The citizens of Massachusetts have stepped in to stop a rampaging US Congress and president. The executive and legislative branches have spent the past year trampling on the will of the people in their frenzy to seize and swallow as much of America as they can, as fast as they can.

This health-care plan is going to be a fiscal disaster for the country. Most of the country wanted to deal with costs, not expansion of coverage. This is going to raise costs dramatically. . .

In the campaign, he said he would change politics as usual. He did change them. It’s now worse than it was. I’ve now seen the kind of buying off of politicians that I’ve never seen before. It’s politically corrupt and it’s starting at the top. It’s revolting. . .

Even that is not the worst part. He could have said, “I know. I promised these things, but let me try to do them one at a time.” You want to deal with health care? Fine. Issue No. 1 with health care was the cost. You know I think it was 37 percent or 33 who were worried about coverage. Fine, I wrote an editorial to this effect. Focus on cost-containment first. But he’s trying to boil the ocean, trying to do too much. This is not leadership.

. . . He’s done everything wrong. Well, not everything, but the major things.

And keep in mind, this was from an Obama worshiper.

Here’s something even more fun from an Obama critic:

What is the Obama agenda?  All eyes have been focused on the proposed bills to transform the way health care is managed, delivered, and paid for in the United States. The Democrats scored a rhetorical triumph by getting everyone, opponents as well as supporters, to refer to this proposed government takeover of medicine as “health care reform.”  “Reform”?  What is being proposed is “health care reform” in approximately the sense that Stalin’s collectivization of agriculture in the late 1920s was “agricultural reform.” That effort to bring hope and change to the Kulaks succeeded in what President Obama described as his goal of  “spreading the wealth around,” though not, perhaps, in precisely a way that the local (de)population appreciated.

The Founders understood both the need for  federalism and the dangers of statism. In their effort to “form a more perfect Union” and “secure the Blessings of Liberty  to ourselves and our Posterity,” they were everywhere at pains to circumscribe the reach of state power. Having tasted tyranny first hand, and having pondered the melancholy lessons of history, they understood the awful metabolism of servitude. President Obama was quite right when, way back in 2001,  he described the Constitution as “a charter of negative liberites (sic).”  What he did not understand then — and what he clearly still cannot get his mind around — is that fact that this “negative,” “merely formal” quality of the Constitution is one of its great strengths, not a weakness. In 2001, Senator Obama complained that the Constitution only told you what the state and federal government “can’t do to you,” not what it must do for you. . .

Obama mind you, is our brilliant “constitutional scholar-in-chief.”

Bringing about “redistributive change” is what the Obama administration is all about. The victory of Scott Brown is a reminder that even in the most liberal state in the Union, that statist imperative inspires fear and loathing, not support.  How Obama and the powers that be in Washington (and I mean Republicans as well as Democrats) will determine the nature and comity of our public conversation for years to come.  The victory of Scott Brown was a sign, a portent, an admonition. . .

And this from Moe Lane:

This message goes out to every vulnerable Democratic Congressman representing a Republican or even centrist district – and after tonight, who among you is not vulnerable? It is a simple message: we can do this the easy way, or we can do it the hard way. The easy way is, you suddenly decide that you have a burning desire to spend more time with your families. So you don’t run for re-election, you walk off stage technically undefeated, and you go join a lobbying firm. The hard way is, you do run for re-election, and we pry you out of your seats.

We want to do this the hard way. We will enjoy doing it.

That’s your only warning. And remember: nobody is going to be able to save you. If the President, the DSCC, the DCCC, the DNC, the SEIU, ACORN, and the netroots couldn’t manage a win in Massachusetts… what do you think that they can do for you?

There is - of course – much, much more. Suffice it to say that the tea partiers are looking more and more relevant. Sorry about that Janine.

Posted by DEWEY FROM DETROIT at 10:57 AM