We reported last February that Detroit was officially not the Worst City Ever, when Forbes gave that “honor” to Cleveland. It appears they are not about to give up that title without a fight.

Broke and deeply in debt, Cleveland recently decided to spend $2.5 million on garbage cans fitted with microchips to monitor use. Mark Gillespie reports on blog.cleveland.com that Cleveland is implementing a new mandatory recycling program that will fine you $100 if your garbage is not sorted between “garbage” and recyclables to Waste Collection Commissioner Ronnie Owens’ liking. 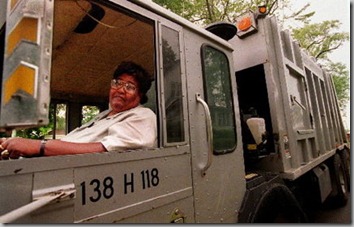 But the big part of the new garbage policy is the high tech, Big Brother style monitoring of your recycling habits. The new garbage cans are fitted with microchips which will wirelessly report to “garbage central” how often you recycle. If you fail to meet Ronnie’s expectations, you will be issued a civil penalty packing a $100 fine, and your garbage will be inspected by the Garbage Police to see if you are putting “recyclable materials” in your regular garbage can.

Once again, in spite of the corruption, crime and desolation of Detroit, we Motown residents can stand up and proudly declare:

“At Least We’re Not Cleveland”

Posted by DEWEY FROM DETROIT at 10:27 AM