Michigan voters did something surprising yesterday, besides bringing the smarmy Kilpatrick dynasty to a definitive end by defeating Congresswoman Carolyn Cheeks-Kilpatrick in the primary. In the Republican gubernatorial primary we elected Rick Snyder: a man who has never held public office. The Democratic candidate is a life-long office holder. The press is calling the upcoming gubernatorial election “the race between the nerd and the angry mayor.” More on point, it’s the race between a businessman and a career politician. I’m putting my money on the business man. 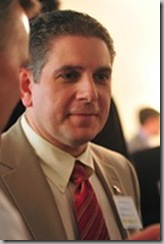 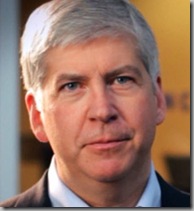 Virg, left; not Emeril before he was inflated. Rick, right.

Of course some Republicans, who don’t find Snyder conservative enough, are already claiming Democrat dirty tricks: voicing concerns that cross over voters jumped in to choose the weak link candidate for the Republican ticket, ala McCain. Indeed the fact that twice as many votes were cast in the Republican primary as Democrat does raise suspicions. But that still doesn’t make it a tough choice come November. The Democratic candidate is Virg Bernero, currently big mouth, media hound mayor of Lansing. He’s never had any job other than elected public official. Oh, and the MEA is his biggest supporter, followed closely by, well, every other union in the state.

Rick Snyder is a successful businessman, entrepreneur and venture capitalist with 3 degrees from the University of Michigan (which I guess makes him a nerd, because not one of them is a Juris Doctorate. And U of M is not Ivy League) He classifies himself as a moderate, so I didn’t vote for him because that always causes me intestinal distress.But given the alternative it’s still a no-brainer unless someone can demonstrate that he’s a child molester. Let’s see: Michigan is in an economic death spiral. Do I elect a man who has demonstrated fiscal responsibility, created jobs and is not antagonistic towards small business? Or a career politician? And please, no more talk about the Libertarian candidate. Might as well wrap the governorship up and hand it to the Democrats.

Let’s face it folks, the days of considering political office as an example of noblesse oblige are long gone. It’s now just another job with incredible perks. I’m going with Rick. I don’t think he’s as impressed with the perks as the loud mayor from Lansing who’s been eyeing them for his entire adult life.

Posted by DEWEY FROM DETROIT at 5:04 PM