Facts About Elias Abuelazam You May- or May Not- Know

The suspected serial murderer of 5 black men in Michigan who was arrested while attempting to fly home to Israel is not Jewish, as MsNBC’s initial reporting implied. Nor is he “white” as reported across many media outlets earlier. He may or may not be Catholic, as reported by the Detroit News. He may possibly be a member of some other Christian sect as reported elsewhere. Technically ABC was correct in stating that Elias Abuelazam is an Israeli-Arab: sometimes referred to as a Palestinian, under other circumstances. 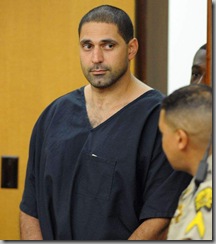 And while he was in the United States on a green card, it had long since expired – which is so often the case these days.  And yes, while he had married (and divorced) an American woman, he never bothered to use that opportunity to gain legal status. So he really wasn’t in this country legally as reported by ABC, NBC, CNN and CBS and FOX.  Aside from that, it looks like the MSM  - who was crawling all over this story with political correctness if not accuracy – got this one  right.

Intrepid blogger Debbie Schlussel (who has an accuracy rate of about 99.8% on these issues) reported the following:

For the record: no one (including Debbie) has yet claimed that Mr. Abuelazam is a Muslim. So we’ve got that going for us. Never-the-less, given that this crime spree was perpetrated by a “middle-eastern” man against primarily black men, it leaves the race industrialists on the horns of a dilemma. But I’ll bet the ACLU can make some hay out of it. Even if it turns out he’s just a nut case.

Posted by DEWEY FROM DETROIT at 1:52 PM