This is Why Liberal Logic Fails

U.S. may expand use of its prison in AfghanistanThe White House is considering housing international terrorism suspects at Bagram air base, as is done at Guantanamo Bay.

(Note: the LA Times is not exactly recognized as a mouthpiece of the right wing nuts.) emphasis and annotation added

Without a location outside the United States (like Guantanamo) for sending prisoners, the administration (that would be Obama) must resort to turning the suspects over to foreign governments, bringing them to the U.S. or even killing them (what the heck).

In one case last year, U.S. special operations forces killed an Al Qaeda-linked suspect named Saleh Ali Saleh Nabhan in a helicopter attack in southern Somalia rather than trying to capture him, a U.S. official said. Officials had debated trying to take him alive but decided against doing so in part because of uncertainty over where to hold him, the official added. (what the heck)

U.S. officials find such options unappealing (good to know) for handling suspects they want to question but lack the evidence to prosecute. For such suspects, a facility such as Bagram, north of Kabul, remains necessary, (I think that’s what George Bush and Dick Cheney tried to tell them) officials said, even as they acknowledged that having it in Afghanistan could complicate McCrystal's mission.

Hey, here’s an idea: why don’t we keep Gitmo open? It’s already there, so no additional cost, it’s outside the United States  so we won’t have to kill them, and since it’s half way around the world from Afghanistan, it won’t compromise General McCrystal’s operations in Afghanistan - the “good” war, as I recall. I’m not 100% certain, but I’m pretty sure even anti-war Liberals would prefer holding prisoners “illegally” to killing them. But I could be wrong.

Meanwhile, apparently even Navy Admiral. Eric T. Olson, head of U.S. Special Operations Command, doesn’t know what to do with terrorists picked up abroad. He was asked in a Senate hearing last week where the U.S. would send a suspect captured in Yemen.

"That's a question that, on so many levels, we would have to go into closed session" to answer, Olson replied.

And that, my friends, is what’s known as transparency. 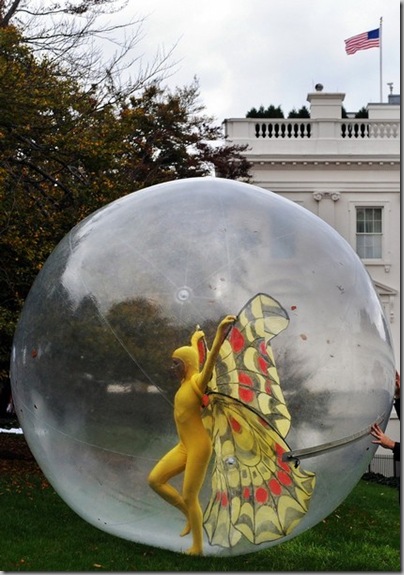 Fairy in Transparent Ball at the White House Halloween Party, 10-31-09

Posted by DEWEY FROM DETROIT at 5:10 PM