The CBO now tells us they never actually cranked the numbers to calculate the stimulus effect. They just used the numbers in the original projection and assumed they worked.

More specifically, CBO first programmed their economic model to automatically assume that stimulus spending creates/saves millions of jobs. And then (surprise!), their model concluded that the stimulus created/saved millions of jobs. This is a classic case of the “begging the question” fallacy, also known as assuming what one is trying to prove.

Yes, this is the same CBO who “cranked” the numbers for the Healthcare bill.

So let’s see if I’ve got this right: The bill was written by staff wonks who spend all their time listening to lobbyists and other wonks. It was passed by legislators who didn’t have time to read the unedited 2700 page bill written by their collective staffs. It was priced by a CBO that doesn’t really crank numbers, they just program their models to assume savings. And it was signed by our President who sincerely believes we should spread the wealth around. (And high-fived by a Vice-President who has deemed it to be a big f---ing deal.)

Well, for starters, there’s this from Nick Gillespie at Reason Magazine. It’s the actual v. projection for Medicare. Only off by 917%. Not bad for government work. Expect the same, only worse, for healthcare. 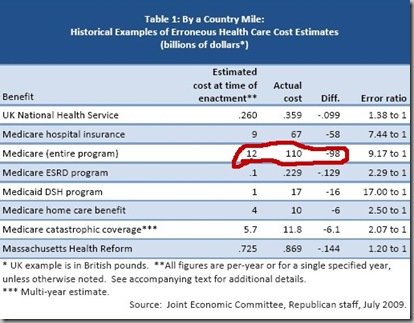 1) Note that the fallacy referenced in the CBO’s calculation of the impact of the stimulus is the same fallacy used by global warming climate “scientists” to “prove”  global warming. Models do not “prove” anything. Other than the modeler’s bias.

2) The only accountable parties here are members of Congress and the President. Please remember that each November.

UPDATE: President Obama signs Healthcare bill. This is beginning to feel like Groundhog Day, minus the fun.