Here’s some of what the President told Bret Baier yesterday:

“I don’t spend a lot of time worrying about what the procedural rules are in the House or Senate,”

No news there. Nobody who’s used to playing by Chicago rules does. Although I should mention that in our democracy, as opposed to, say Chavez’s, procedures are precisely what separate us from dictatorship.

So, a yes vote, whether it is actually cast or not, is a vote for Obamacare. But a no vote is a vote - not against Obamacare - but for the status quo. You remember the status quo don’t you? Evil insurance companies, doctors who yank your children’s tonsils out just to make a buck, Emergency rooms that refuse to treat critically ill patients who don’t have insurance (as far as I know, Michelle’s hospital in Chicago was the only ER accused of this type of “patient dumping”anytime in the recent past), pharmaceuticals that gouge everyone and a Medicare system riddled with billions of dollars in waste and fraud (Why doesn’t someone just take care of that right now? We don’t need a healthcare bill to investigate and eliminate fraud and waste, do we?).

“So Washington gets very concerned with these procedures in Congress, whether Republicans are in charge or Democrats are in charge,”

But that’s just Washington: they get all wee-weed up over the least little thing. The rest of you rubes don’t care if these pesky “procedures” are unconstitutional. Right? As long as we pass Obamacare so Obama can take over the health industry and whip them into shape the way he’s whipped GM, Chrysler and AIG?

I,I,I, me, me, me, let me be clear’s. let me finish’s. Typical presidential exchange. Big on Rhetoric, lies and self-references. Short on the truth, clarity and facts. Here’s Bret explaining the above exchange with the President to Shepard Smith. 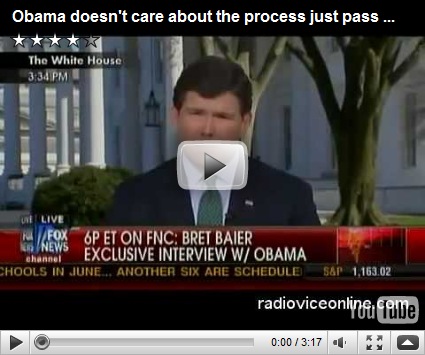 Fox News has the whole interview here. Watch only if you enjoyed the last Presidential campaign.

Update. Just in: CBO puts a $940 billion price tag over 10 years on whatever is in the current bill. Surprised that it came in under a trillion dollars? No, I didn’t think so. That was the target in order for the White House to pick up the last few votes they need to screw the pooch. Here’s Hot Air’s take on why it took them so long, and how much confidence you can put in it.

Posted by DEWEY FROM DETROIT at 10:19 AM